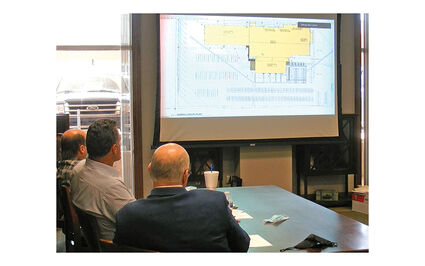 Alva Arena Authority trustees look at a drawing of the parking area around the planned arena building to determine where solar panels might be placed. Seated from left are Gregg Glass, Mike Hood and Daren Slater.

The Alva Arena Authority now has a timeline for financing, bidding and construction contracts for the arena project. Representatives of the design and construction companies virtually joined the Tuesday, Feb. 2, meeting to give an update. The group also discussed the possibility of adding solar panels to provide electricity.

Calvert said the goal is to have updated bids ready as soon as financing is secured. A month ago, he talked to Timberlake to get bid specifications updated.

Over the last week, Priefert has updated the project drawings with the changes made by the arena board members. "As of today, the drawings are clean," Calvert said. The subcontractors will use the new drawings to update their bid information.

Witte introduced Burris as the arena project manager for Timberlake. As the grandson of Alva residents Jerry and Joyce Egner, Burris has ties to the area.

Calvert asked if Timberlake is optimistic about subcontractors not being too booked up to bid. Witte said he's talked to most of the bidders and they know to keep resources available for the arena project.

The financing lender is working with the USDA and a 60 day delay is in effect so the entities can go through all the financing paperwork. Considering that delay, Calvert asked when the bid package should be submitted.

Holder said he talks each week with the financing people and about three weeks have been carved off so far. While he'd like to start in April, Holder admitted that was a pipe dream. The practical answer is mid-June or the first of July. Calvert said he would back up to May 1 to go out for bids.

Witte said they need a three week bid cycle and two more weeks to go over the resulting bids. Then the bids would go to the Alva Arena Authority.

Calvert said after Timberlake gets the bids, they should be ready for the board members to review in the first week of June. The bid package will include the basic design and several alternates. It will be up to arena authority members to decide how much can be built with the financing available. After that's decided, construction contracts can be executed.

O'Reidy asked if the financing amount is expected to change after the 60 day process. Holder said he didn't think it would change, but the USDA needs the time to go through everything carefully.

The discussion then moved to adding solar panels to supplement electricity and possibly sell the excess back to OG&E. Calvert displayed an outline drawing of the main arena building and surrounding parking. The solar panels would be in the form of canopies over parking.

Calvert thought the panels should go in the northeast corner of the parking area. Hood, who has been researching the idea, said, "Those things have to face south. I'm not sure there is enough light at the northeast." He said the best location would be on the south side.

As for the cost, Hood said he just got a quote on a number of canopies but they did not discuss location. Calvert asked how solar would be funded.

Holder said the lending group has a section that does solar financing. He planned to talk with them on Wednesday. Solar usually means tax credits and paybacks so that would help with the cost.

Solar will not be part of the bid package in May, but it could be done at a later date. Any conduit would be laid in the gravel area of parking which shouldn't affect construction other a change for electrical connection.

Calvert noted that OG&E has really attractive buy-back rates for extra solar energy. He wondered if buy-back rates could be guaranteed for a certain amount of time. Hood is going to get more information and talk with OG&E.

Priefert and Timberlake representatives signed out, and arena trustees went back to the regular meeting agenda.

In the treasurer's report, Holder said the balance is $160,183.22. This is after the payment for the appraisal required by the USDA financing. Holder said one check for $3,720 had been sent out but had not yet cleared the bank. The arena authority also received a $100,000 donation the preceding week.

In the Design Committee report, Hood said he'll be getting more information on added solar to the project.

For the Management and Operations Committee, Holder told the group it's time to think of management groups or teams. With the pandemic, some new opportunities may have opened up. Slater asked for "a wild guess" on when they would be ready to hire management.

Holder said that some would say now while others would say when they start to turn dirt. He thinks anytime from spring into the fall.

In the Funding Committee report, Holder said he is meeting every week on financing. The appraisal is being work on. He said BKD is doing a good job with the requirements on the financial side.

With no further business, the meeting adjourned. The next scheduled meeting is Tuesday, March 2.