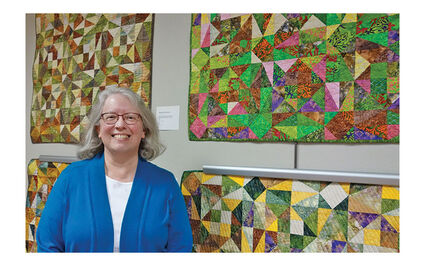 Brenda Esslinger of Oklahoma City describes herself as an artist, quilter, teacher and author. She is one of the featured arttists this month at Graceful Arts Gallery in Alva.

"I first became enamored with needle and thread when I was about four years old," says fiber artist Brenda Esslinger. "I've been doing anything and everything I can learn – sewing, embroidery, needlepoint, crochet, knitting, lacemaking – you name it. If it involves fibers, I've tried it."

The Oklahoma City artist is mostly self-taught. She began quilting when she was about 14 years old. About 20 years ago, she really focused on quilting although she still dabbles in other fiber arts.

"I used to own a quilting shop with my sister, and we bought a long arm quilting machine. Before that,...