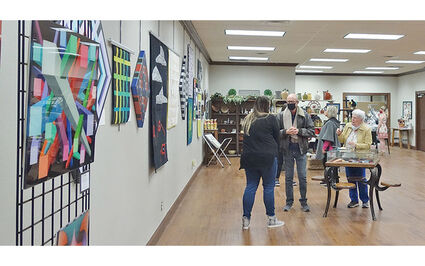 Alva's First Friday Art Walk offers a chance to visit with friends while enjoying the February exibit at Graceful Arts Gallery. The Fabrics of the Heartland exhibit includes textile and visual works by Oklahoma artists.

What is Qu'Aint? It's a joining of the words "quilt" and "paint," but it's also a joining of those two art forms. It's also the concept of the featured exhibit at Graceful Arts Gallery in Alva during February.

The Qu'Aint Collaboration began to flow together in 2018. The Oklahoma City Modern Quilt Guild (OKCMQG) was preparing to hang a fine arts exhibit at Artspace. The installation was being coordinated by Agnes Stadler and Ann Solinski. By mid-May Solinski came to admire the work of contemporary fine art painter Jason Wilson online and invited him to attend the exhibit.

After Wilson viewed the Artspace exhibit and talked with Solinski, the idea of collaboration began germinating. A few blocks away, the Fiber Artists of Oklahoma were holding their biennial show. There Wilson came across a piece by Brenda Esslinger that looked like something he would have painted. In 2019 Wilson visited Esslinger's studio in Oklahoma City, and she made plans to interpret one of his paintings as a quilt.

In March 2019 Wilson and a group of quilt artists met as a group, adopting Qu'Aint Collaboration as their name and discusses three phases of work. First the group chose one painting and all members created an original work based on that painting. Then each group member chose their own painting from Wilson's inventory on which to base an original work. Finally Wilson chose a quilt on which to base a painting, which he did seven times.

The Fabrics of the Heartland Exhibit at Graceful Arts Gallery in Alva during February is the group's fourth exhibition.