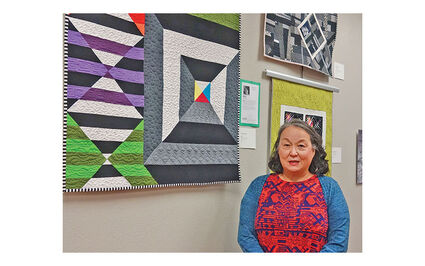 Ann Solinski of Oklahoma City is atrracted to the bold colors and patterns of modern quilt design. She is one of the featured artists this month at Graceful Arts Gallery in Alva.

"I got my good machine in 2010 so that's when I knew I had to get serious about it (quilting)," says Ann Solinski with her dark eyes sparkling. She's been quilting for about 11 years now.

In the beginning she used patterns made by other people, but in the last five years she's been making her own designs on a computer using Adobe Illustrator. As a graphic artist, "I already have some of those skills in my toolbox, and I can cross over."

She sees 2013 as a turning point that shifted her focus to modern quilt designs. That year she joined the Oklahoma City Modern Quilt Guild. "There were a couple of quilts being made then that just blew me away," said Solinski. "I like traditional ones as well, but it's some of the modern things.

"There's one called Tokyo Subway that used a lot of white space and little flecks of color. I liked that very much. I think it was just the negative space and all that dynamism that I enjoyed the most."

After joining the guild in 2013, she served as president in 2014. "They always manage to get the new people to be officers. I don't know how that works," commented the vivacious Solinski.

She says the guild is composed of "really great people of all ages. A lot of the older quilters, which I guess I'm getting to be one of, have found some things they enjoy in modern quilting, too. It's not just the kids and the millennials. It's all of us because there's something you can learn from everyone."

Solinski is involved with Qu'Aint Collaboration, joining quilting and painting. She acts as publicist for the group which is currently exhibiting at Graceful Arts Gallery in Alva. During February the gallery walls are lined with beautiful textile art in the form of quilts. Alongside these is an exhibit of Jason Wilson's painting inspired by quilt designs.