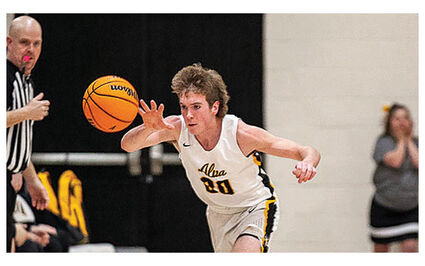 Phillip Randall (20) steals the ball away from the Hooker offense and is able to run away with it.

The Alva Goldbugs took on the tall and impressive Hooker Bulldogs Saturday afternoon for homecoming. With their tallest player Zach Hildalgo listed at six foot, seven inches, the Bulldogs had definite height advantage. However, Alva's Braden Hofen was able to out-jump him on the opening tip.

The Bulldogs led throughout the game until the final quarter when the Goldbugs took over, scoring 24 points to Hooker's ten for a close 60-52 victory. The Hooker team is ranked second in the state in Class 2A so Goldbug players and fans were jubilant at overcoming such a tough opponent.

Hooker's Hildalgo put up the first two points of the game followed by two from Dillon Metcalf on a put-back. Alva's Austin Reed hit a triple to pull within one. Cole Fischer made a triple for the Bulldogs, but Kyler Penco answered with a Goldbug three-pointer. The score was now 7-6 for Hooker.

Metcalf scored on another put-back, and Cole Cathcart hit a basket off an offensive rebound. Cathcart scored again to increase the Hooker lead to 13-6. Hofen made a basket, but Cathcart answered with ta three. Phillip Randall added another basket for Alva. Hofen was fouled and made one of two attempts. The score was now 16-9.

Reed tried for a three that missed, but Hofen grabbed the rebound to try for a basket. He was fouled and missed both shots. Karson Neville hit one of two free throws for Hooker. Reed finished out the quarter with a basket, and Hooker led 17-13.

As the second period opened, Chuck Shelite made a quick pass to Reed who sank the basket. Metcalf scored and was fouled but missed the free throw shot. Hildalgo scored on an offensive stick-back. Then Reed scored again for Alva. Hooker now led 21-17.

After Metcalf missed the first shot of the one-and-one, Cathcart sank a three-pointer to widen the margin. Following several attempts by both teams, Hooker's Fischer hit a triple to increase the lead. Phillip Randall quickly sank a three for Alva. Metcalf scored on a stick-back, but Alva's Jackson Feely found the range from beyond the arc. The Bulldogs led 29-23.

Cathcart scored on a trey. Hofen made one of two free throws, and Reed made a basket to close out the half. Hooker led 32-26.

Reed kept Alva in the game during the first half with 13 points. Hofen had four while Feely, Penco and Randall had three each.

After Cathcart scored a basket for Hooker, the Goldbugs went on a six point run with two from Shelite and four from Penco including a couple from the charity stripe. Alva was now within two at 34-32.

The Bulldogs pulled ahead on two baskets by Fischer and one by Cathcart. Then Cathcart made another trip to the basket, missed, rebounded and scored. Hooker now led by 10 at 42-32.

After Reed scored on a basket, Penco took the ball to the rim and was fouled. He made both free throws. At the end of three quarters, Hooker was up 42-36.

The determined Goldbugs were hot in the final period. Feely scored a triple on an assist from Reed. Cathcart was fouled as he shot a three and went to the line with three chances. He made only one.

Cathcart missed again on a basket, rebounded and was fouled. He missed both those free throws. On a Reed assist, Penco hit a basket from three-point range to put Alva within one at 43-42.

Metcalf was fouled and went to the line, hitting one of two. A technical was called on Hooker, and Penco went to the charity stripe, sinking both shots to tie the score at 44 all.

Daylon Malone drove to the rim for a layup and was fouled. He hit the extra point, and Alva led 47-44. Cathcart was fouled and went to the line for a one-and-one. He missed. Then Randall faced a one-and-one for Alva, but he hit both free throws to increase the Goldbug lead to 49-44.

Reed fed the ball to Penco who scored and was fouled. Penco missed the extra shot, but Hildalgo fouled out in the process. Alva now led 47-55.

Metcalf was the only Bulldog who seemed able to get past the Alva defense and score. Meanwhile the Goldbugs racked up more points on a Reed basket, a couple of Penco free throws and another free throw from Hofen for the final Alva win of 60-52. 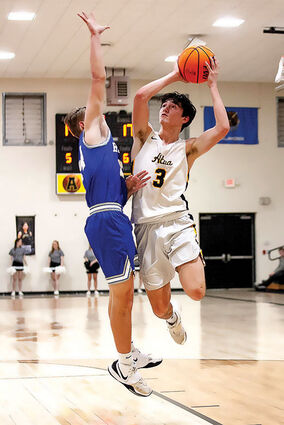 Alva's Austin Reed (3) catches some air as he goes up for 2 points against the Hooker defense.

Penco led the Alva scoring with 18 and was accurate from the free throw line making eight of nine attempts. Reed followed with 15. Hofen had nine points and nine rebounds. Randall scored seven, Feely six, Malone three and Shelite two. The Goldbugs did better on turnovers with only 13 for the game.

Cathcart led the Bulldogs with 20 followed by Metcalf with 14 and Fischer with ten. Hidalgo had five and Neville three. The Bulldogs had a difficult time at the charity stripe, making only seven of 21.

The Goldbugs will skip the trip to Woodward Tuesday because of over-scheduling. They played some games while the Ladybug team was out due to Covid exposure. The next game for the Goldbugs will be Thursday when they travel to Fairview. The final matchup of the regular season will be Saturday at home when they take on Perry in an afternoon game about 1:30.

Alva will host Blackwell for the district playoff on Friday, Feb. 19.