Alva Ladybugs pull within two but lose to Hooker 57-48 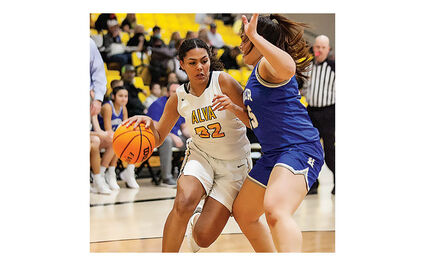 The Alva Ladybugs knew it would be a tough game when they hosted the Hooker Lady Bulldogs for homecoming Saturday afternoon. The Hooker team is ranked seventh in the state in Class 2A with a 15-1 record while the Ladybugs are 17th in Class 3A with a 9-7 season.

In the first quarter, Hooker tripled Alva's score but the Ladybugs put on a strong scoring drive to pull within two baskets by halftime. The third quarter was even closer, but the Lady Bulldogs pulled away in the fourth to win 57-48.

The Ladybugs are still missing three key players with Brooke Perez out for the remainder of the season with a knee injury, Aimee Chapman sidelined by concussion effects and Chloe Durkee waiting out Covid protocols. Homecoming Queen Rianna Clark was the only senior playing Saturday.

Starting off the game, Clark was fouled but missed her free throw shots. Hooker went on a 7-0 scoring run before Clark hit a basket for the Ladybugs. Other than a basket by Cynthia Samaniego, Alva couldn't get shots to fall. The Lady Bulldogs were up 21-4 before Samaniego sank a three-pointer for the last score in the quarter. Hooker led 21-7.

After a basket from three-point range by Jaedyn Williams, Morgan Heath missed a couple of free throws. Eventually the Ladybugs narrowed the gap to 27-21 on a third trey by Williams. Carly Argo also hit a three-pointer in the quarter, and at halftime Hooker led by four at 31-27.

At halftime, Williams led the Ladybugs with nine points, all of them scored in the second quarter. Smananiego had five, Heath four, Hallie Hamilton three, Argo three, Clark two and Bogdanavicz one. Alva made only three of ten opportunities from the free throw line.

The Ladybugs improved their free throw shooting in the third period, and those made six of the ten points they scored. Heath and Hamilton each made a basket in the quarter. Heath hit three free throws, Hamilton two and Samaniego one.

Had it not been for the two triples by Alondra Ortiz, the only points she scored in the game, Hooker would have lost their scoring edge. Hollie Stalder and Mattie Swayze added a couple of points from the charity stripe. Alva out-scored Hooker in the quarter 10-8. At the end of third period, Hooker led by two at 39-37.

Hooker pulled ahead on a Maloney three and two free throws from Stalder before Heath sank a trey for Alva. The Lady Bulldogs now led 44-40. Heidi Rodriguez sank a bucket from outside the arc to increase the lead. Heath was fouled and made both free throws.

Then Hooker made four trips to the free throw line with Swayze, Stalder, Janet Cervantes and Stalder again each sinking both their shots. Meanwhile, the Hooker defense kept the Ladybugs away from the basket. Heath finally managed a three for Alva, but Hooker led 56-45 with just seconds to go in the game. Clark fouled out keeping Cervantes from the goal. Cervantes made one of her two free throws. Williams sank one last three for Alva, her fourth of the game, and Hooker won 57-48. 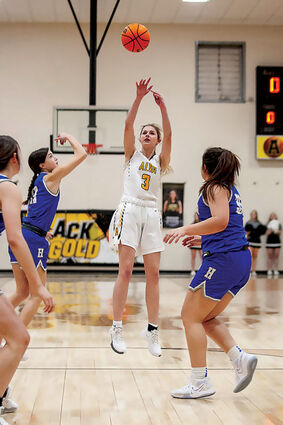 Ladybug Mason Bogdanovecz (3) takes a shot at the free-throw line with the Hooker defense all around.

Heath, a freshman, led the young Alva team with 17 points, making 13 of those in the second half. Williams followed with 12. Hamilton had seven, Samaniego six, Argo three, Clark two and Bogdanavicz one. The Ladybugs improved their free throw shooting in the second half to 10 of 21. They made only nine of their 21 attempts from three-point range and had 12 turnovers.

For the Lady Bulldogs, Stalder led with 14 followed by Swayze with 13 and Cervantes with ten. Maloney had nine, Ortiz six and Rodriguez five. The Hooker girls had 16 turnovers.

The Ladybugs will take a 9-8 season record into their road game Tuesday when they go to Woodward for a 6:30 tip. The Goldbugs will not be playing because they've played several extra games this season. Thursday night, Alva travels to Fairview for games starting at 6:30 p.m. and Saturday Perry will be in Alva for a noon start time. That will end the regular season play.

Alva will host Blackwell on Friday, Feb. 19, for the district playoff.