Remembering the Blizzard of 1971 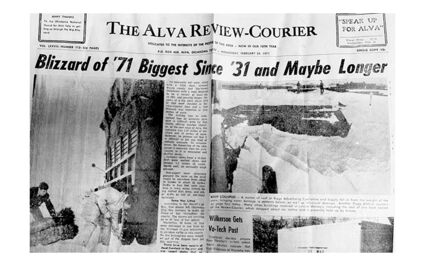 The front page of the Alva Review-Courier from Feb. 24, 1971, features the Blizzard of '71. The photo was posted to the "You know you're from Alva if..." Facebook page by Jerry and Joyce Egner of Alva.

Snow predictions of 8 to 15 inches this weekend, depending on the forecast source, have older Alva residents recalling the Blizzard of 1971. That snowstorm occurred nearly 50 years ago on Feb. 21-23, burying northwestern Oklahoma under as much as three feet of snow, not accounting for drifts. Buffalo to the west of Alva was hardest hit, reporting 23 inches of snow on the 21st and a state-record snow depth of 36 inches by the morning of the 24th.

The snow was driven by winds of 30 to 50 miles per hour, producing drifts as high as 20 feet. Military cargo planes were used to airdrop hay to cattle stranded in the far-flung pastures of the region. Losses to agriculture were estimated at $2.1 million in 1971 dollars. The Blizzard of 1971 is included in most Top Ten weather event lists for the Great Plains.

Alva was shut down for a few days until roads and highways could be cleared. The National Guard used a track vehicle to transport healthcare workers to and from the hospital. In rural areas some telephone service was down and communication was by two-way and citizens band radio.