Rangers fall to OBU at home 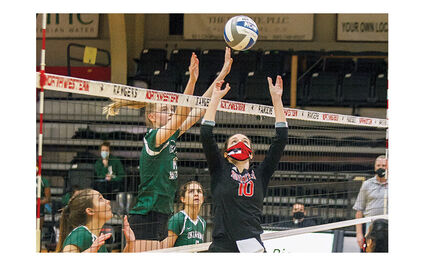 Lady Ranger Avery Osburg (10) goes up to set up the shot for her teammate.

Northwestern Volleyball (RV) moves to 3-1 overall and 1-1 in the Great American Conference.

"I feel that this was a great test for us." Head Coach Fred Aubuchon says.

"I have no doubt in who we are and now we know that when you get pushed by a good team, you have to push back." He explains.

"It's only our fourth match of the season and we will absolutely grow from this."

Courtney Russell finished with six kills and a .455 attacking percentage (6-1-11).

Carmae Jones ranks second in NCAA DII for blocks per set with 2.25. Jones finished the contest this afternoon with three kills and two blocks.

Sydnee Miller finished with 16 digs and one assist. 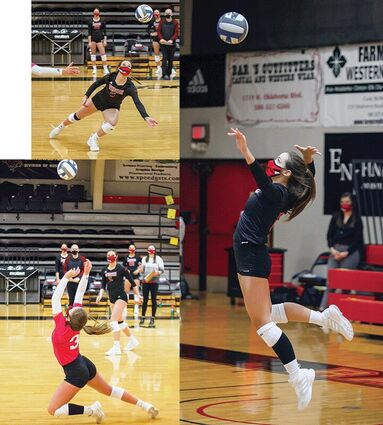 SET 1: Jones opened scoring for the Rangers after she dished out a hard hit that was assisted by Osburg. Honeycutt, Deterding and Russell helped the Red and Black keep an early lead until the Bison fought their way back after the scores were tied at 19 apiece. The Bison went on a 6-0 scoring run and defeated the Rangers in the first set 25-19.

SET 2: Deterding led Northwestern in the second set with five kills, followed by Honeycutt who added four. Tarra Parks racked up three quick service aces and Miller dug the ball six times. The Rangers were able to leave the Bison without a block in set number two, while they tallied four for themselves. Northwestern led 23-20 but the Bison were able to score five quick points to grab a second straight set victory.

SET 3: The Bison finished the third set hitting .400 with a (17-3-35) clip. The Rangers hit .250 with a (14-3-44) clip and were led by Honeycutt who chipped in four kills, and Madison Dehlinger who added three. Oklahoma Baptist secured their victory after holding Northwestern 25-18 in the final set of the afternoon.

The Red and Black will host the Crimson Storm of Southern Nazarene on Feb. 16 at 7 p.m.