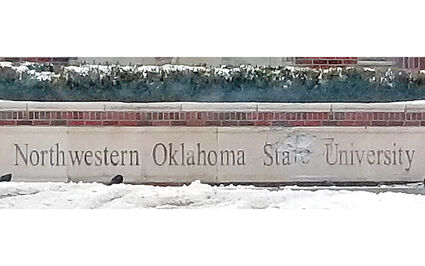 A motorist was unable to stop on snow-packed streets Tuesday night, crossing Oklahoma Boulevard from Seventh St. and crashing into the concrete sign on the Northwestern Oklahoma State University campus. Damage can be seen at the top edge of "State."

After the ice of the previous weekend, Alvans braced themselves for the possible 8-15 inches of snow predicted for Valentine's Day. The snow amounts were closer to three inches, but temperatures plummeted to below zero bringing more hazards. Additional snow fell Tuesday night.

The Southwest Power Pool (SPP), power grid operator for a region covering 14 states in the central U.S., has lowered its Energy Emergency Alert to conservative operations. SPP has directed its member utilities, including OG&E, to continue pausing controlled interruptions of service.

"Our conservation efforts are working, and we thank our customers for voluntarily reducing energy usage during this difficult time," said David Kimmel, OG&E spokesperson. "While things are improving, it's important that we stay diligent until natural gas supplies stabilize."

After the Monday holiday and equipment issues Tuesday, the Alva sanitation department crew was out Wednesday for commrcial service routes. They began covering residential areas Thursday.

Presidents Day on Monday, Feb. 15, was a holiday for City of Alva employees but the street department was out working to clear roadways and sand intersections. A newspaper employee delivering Newsgrams in the early hours of Wednesday morning witnessed a vehicle reversing after striking the concrete sign at Northwestern Oklahoma State University. The driver was apparently unable to stop at the Seventh Street intersection and continued across Oklahoma Boulevard to run head-on into the sign.

After the Monday holiday, the Alva sanitation department couldn't pick up trash on Tuesday, blaming equipment maintenance issues. They started a little later than normal on Wednesday to catch up on the commercial routes and began residential service Thursday and Friday.

Sunshine and temperatures in the upper 20s had everyone smiling on Thursday. It was warm enough for some snow to melt off paved areas. The high for Friday is predicted to be above freezing to increase the thaw.