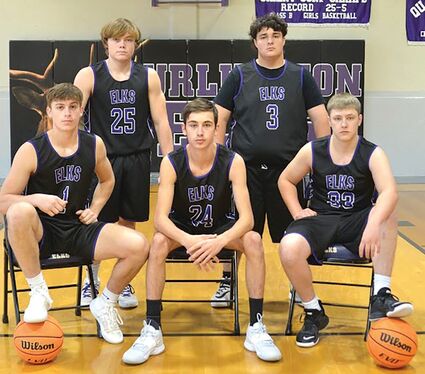 These Burlington seniors have had to endure many disappointments in their final season of basketball play this year. Most recently, their Senior Night had to be canceled due to weather. The Burlington Elks senior team members are (from left) Preston Paschall, Paden Allen, Derek Whittet, Kade Wright and Caleb Cox.

The Burlington Elks' basketball season has been far from perfect. Difficult setbacks like positive Covid cases, weather conditions, and canceled games have made their season far from normal.

Despite these difficulties the Elks have had a fair season, sitting at seven wins and five losses so far. With playoffs beginning, the Elks are one and one beating Medford and advancing to the district championship where they lost to Timberlake.

The Elks will play Saturday, Feb. 20, against Sharon-Mutual at Leedey, where they hope to continue their playoff journey.