Kinzie helicopters assist rescue efforts in the Blizzard of 1971 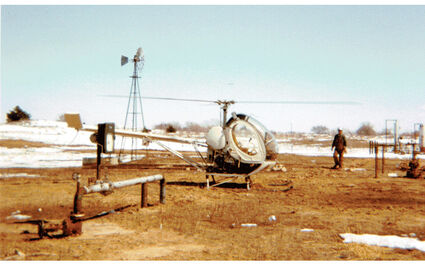 A Kinzie helicopter brings people and supplies to a ranch. The helicopter continues to run to keep from freezing up. The pilot is the photographer.

(Editor's Note: On Feb. 21-23, 1971, a snowstorm buried northwestern Oklahoma under as much as three feet of snow, not accounting for drifts. The snow was driven by winds of 30-50 mph. Paul Kinzie interviewed his parents, Wayne and Beverly Kinzie, about those events.)

The "Great Blizzard of '71" just happened to catch Kinzie Industries with three flying Hughes helicopters. This was unusual as the helicopters were generally delivered to the customer soon upon completion. Fortunately, local helicopter pilots Wayne Kinzie, Glen Hasty, Harry Tyree and Merle Cordray were available to fly.

As the snowstorm continued into its second day, phone calls started coming in with requests for assistance. The office for the business was located at Wayne and Beverly's home. Utility companies, ranchers/farmers, and oil field companies were among those phoning. At first the Kinzies were hesitant as they were not really in the "aircraft for hire business". But as the calls increased Wayne and Beverly knew they had to do something. So they started informing callers that helicopters would be operational when they could get to the airport.

As soon as the snow let up Wayne and his three sons, Paul, Mark and Tim went out and cleared the driveway. Not much wind and about two feet of snow everywhere along with a few drifts. Just as they finished, the city snowplow came down 4th street and rolled a big snow embankment up blocking the driveway. Wayne decided that was that. He called Vale Jasper and took him up on his offer for a ride to the airport in the National Guard Halftrack. Vale at the time was Commander of the National Guard unit. The Guard had been busy running around town hauling emergency supplies, food, nurses and essential personnel. One of Jasper's biggest concerns was crawling over a snow drift when there might be a VW (Volkswagen) underneath!

With four pilots, the three helicopters were flown constantly from dawn to dusk for several days. Beverly stayed at the office and acted as the main communication hub receiving phone calls and relaying messages to and from pilots. A master list was developed for individuals who needed a ride and or supplies flown. Arlo Darr brought a huge map of Woods County to the office, and it was used to track where people were taken and where helicopters were located.

The Kinzie Hangar at the north end of the airport was the center of operations out there. When a helicopter returned, a call would be made to the office and the next person up on the list would be loaded and flown out.

The first day or so was mainly power and oil companies being flown around. One mission was to west Woods County. The electricity was out in the Freedom area and south toward Waynoka. The power company for that area was one of the first calls that came in. There was a dairy herd that could not be milked due to the electrical outage.

Wayne flew to Freedom, landed on the main street and picked up a power company employee. A farmer about seven miles west of Freedom had noticed something was not right on an electrical pole. She could see it from her back door and had notified the power company. Wayne flew to the farmer's location to analyze the problem. Then he flew five miles north to a substation so power could be shut off and then back to fix the problem on the utility pole. There was a return to the substation to turn the power back on and then on to Freedom to drop the power company man off. Additional flights for power companies were made along with several trips to oil rigs to shut down wells.

As Alva continued to get some of the main streets cleared, people started heading to the airport. The Kinzie hangar was stacked full of people waiting their turn to be flown. Local individuals climbed into helicopters that never ever would have flown before the blizzard! As one lady rancher said, "When cows are hurting folks will do anything." People were delivered where they needed to go – stock tanks, barns, etc. – and the helicopter would then proceed on to pick up an individual they had dropped off a few hours earlier. A helicopter was never empty in either direction.

One rancher came out with a battery, jumper cable, food, bedroll and clothes. There were so many items the pilot was not sure he could get off the ground with everything loaded. This rancher just wanted to be dropped off and left with no intentions of getting picked up and returning.

The Deckers and Jiffy Trip were helpful in providing fuel for transportation to and from the airport for the pilots. They also assisted in getting groceries and some supplies rounded up for delivery by helicopter to those in need. Wayne would pick those up on his way to the airport each morning.

Stranded people were picked up who required medical attention including a mother-to-be with a baby on the way. Fuel, food, and supplies were flown to those in need as well. If the snow could not be cleared for landing, instructions would be given to lay out a couple of ladders in the snow for the helicopters to land on. This helped keep the helicopter from sinking while people were climbing in or out. 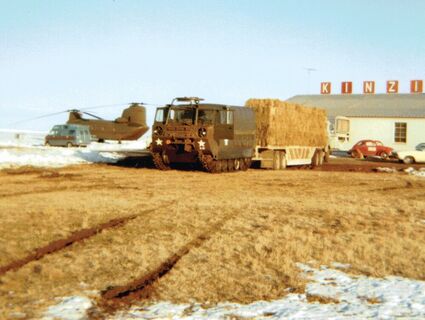 A National Guard vehicle delivers a load of hay for cattle to the Alva Airport where it will be loaded onto the Chinook helicopter at the left. The hay was then dropped to cattle stranded in the snow.

One county commissioner called and asked how many gallons of diesel plus a catskinner could be hauled in a helicopter. Wayne figured 15-20 gallons plus the catskinner. So a cargo rack was installed on a helicopter. Wayne flew the county employee about 20 miles northwest of Alva to where the bulldozer was located. The man's job was to bulldoze a road from where the machine was sitting to Alva. Wayne landed the helicopter and helped fuel the bulldozer. The helicopter was left running for fear it would not start again. Wayne stayed until the bulldozer got started, running, and moving. The pilots kept tab on the bulldozer's progress as they flew their operations.

Eventually a National Guard Chinook flew in to be used to feed cattle. The snow had been heavy and wet but when that Chinook came in for the first time it cleared loose snow (and other objects) for 100 feet around the helicopter pad! The National Guard used the Kinzie helicopter pad for operations and slept in the Kinzie hangar at night as it was heated and had a restroom. Mike Hellman who had recently returned from Vietnam and was an employee of Kinzie's stayed with them to assist.

Every evening when done for the day the pilots, Wayne, and Beverly would get together to make sure everyone who had been taken out was picked back up and brought in. They would also plan for the next morning. Through the entire event every pilot and helicopter had performed well with no mishaps.