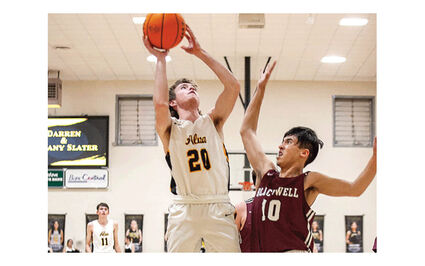 Alva's Phillip Randall (20) takes a shot over the Blackwell defense.

After three previous wins against Blackwell this season, the Alva Goldbugs weren't too worried about the outcome of their Monday district playoff game in Alva. The Goldbugs won by a lop-sided 61-37 to take the district championship.

The outcome of the game seemed fairly certain after the first quarter when Alva led 13-1. The Maroons were finally able to hit the basket in the second, scoring 13 to Alva's 16. The Goldbugs led 29-14 at halftime.

In the third period, Alva had 19 points to 14 for the Maroons to increase the lead 48-28. The Goldbugs emptied the bench in the final period and won 61-37. 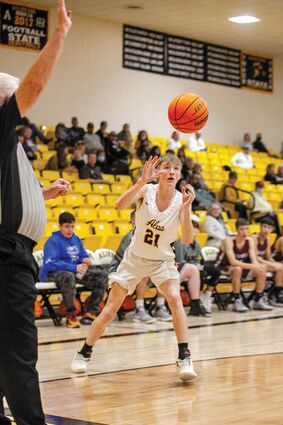 Alva's Jaxon Jones (21) catches the ball and shoots a three pointer during Monday's game against Blackwell.

Austin Reed and Jackson Feely shared scoring honors, leading the Goldbugs with 12 points each. Daylon Malone, Kyler Penco, Braden Hofen and Jaxon Jones each put in six points. Kaden Slater who has been recovering from a football injury made an appearance in the final period to score four points. Phillip Randall also had four while Weston Tucker had three.

The Goldbugs were to travel to Chisholm Thursday night to face the Chisholm Longhorns for the first round of regionals. Chisholm defeated Bethel 52-43 to advance to the winners' side of the Class 3A bracket.

Blackwell moves to the consolation bracket of regionals to play Bethel.