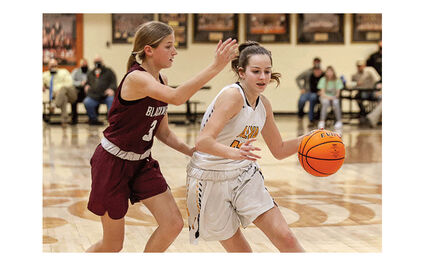 Alva's Carly Argo (14) makes her way around the Blackwell defense to the basket.

The Alva Ladybugs took on the Blackwell Lady Maroons in district playoffs Monday night in Alva. With the playoffs delayed by weather, both teams had an unexpectedly long break between games. Alva led in scoring through the last three-quarters of the game to take the district champion trophy with a 52-33 win.

The Ladybugs got off to a slow start with Blackwell putting the first two baskets on the scoreboard. Cynthia Samaniego opened Alva scoring with a straight on three-point shot. Rianna Clark was fouled in the act of shooting and made one of two free throws to tie the score at 4. Hallie Hamilton scored to finish the first quarter with Alva leading 6-4.

The Ladybugs heated up in the second quarter, scoring 21 points to Blackwell's 14 to lead 27-18 at the half. In the third quarter, the Ladybugs had an 18-1 run to take decisive control of the game. The Lady Maroons had eight points in the quarter, but Alva sank 21 to lead 48-26.

In the fourth period, Coach Dusty Horn gave younger players some time on the court with Blackwell outscoring Alva seven to four for the final of 52-33. 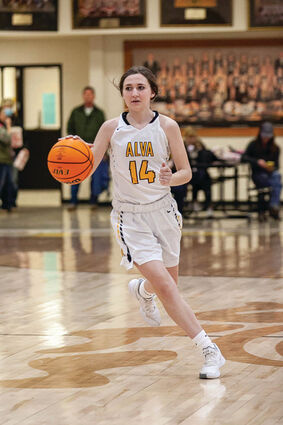 Alva's Ashlyn Whitely (14) dribbles down the court during the game against Blackwell.

The Lady Maroons were led by Kingsley Goff with 18 followed by Keitlynn Rios with five and Natasha Hindman with three. Bree Rowe, Bostyn Chambers and Kellyn Botts each had two.

With the district win, the Ladybugs were scheduled to meet Chisholm in the first round of regionals at Chisholm Thursday at 6 p.m. The Chisholm Lady Longhorns defeated Bethel 43-41 on Tuesday.

The Blackwell Lady Maroons moved into the consolation bracket of playoffs to face Bethel on Thursday.