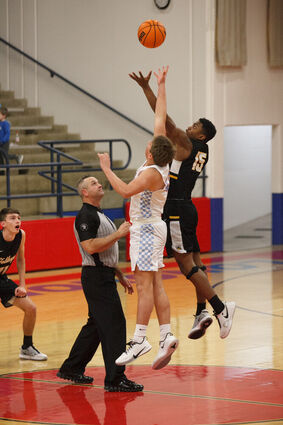 Alva's Braden Hofen (15) was able to jump higher than Chisholm to get the jump ball at the beginning of the game.

The Alva Goldbugs are a much different team from the one that Chisholm played and defeated early in the season. Alva traveled to Chisholm for the first round of regionals Thursday night and brought home a decisive 59-42 win against the Longhorns.

The teams played fast and hard in the first quarter ending with a 12 point tie. Alva scored 16 points to Chisholm's ten in the second. In the third, Alva added 14 points while holding Chisholm to nine, and continued to lead for the final victory.

Braden Hofen put the first points on the board with a couple of free throws but Longhorn Par...