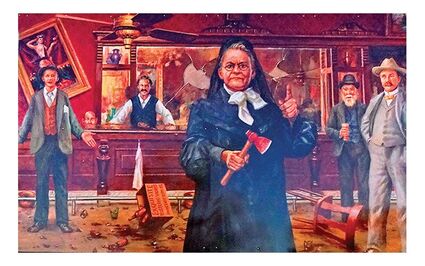 Temperance advocate Carrie Nation leaves a trail of destruction in a bar where she swung her hatchet to smash the mirror and the alcohol supply. The mural by Don Gray is displayed on the east side of the Share Annex at Cherokee Strip Museum in Alva.

A hatchet-wielding Carrie Nation is the subject of the newest mural in Alva. While living in Medicine Lodge, Kansas, Nation began her temperance work with an attack on a bar in Kiowa, Kansas, just north of Alva. Her "hatchetations" spread across Kansas and beyond.

Bars were illegal in Kansas but not in Oklahoma at the time. Although there is no documentation of her taking on a bar in Alva, she is known to have visited here. Both Carrie and Carry are considered correct spellings of her name. She was born Caroline Amelia Moore in Garrand County, Kentucky, in 1846, and died in 1911.

Through the Alva Mural Society, the display was first done as a large painting by Don Gray, an artist who created several of the local murals. Jim Richey of Alva, who acts as liaison with the mural artists, said earlier paintings are showing signs of age. They have required some touch-ups and patching. 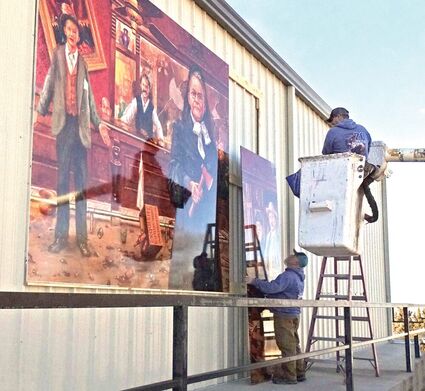 Kelly Schrock prepares to lift the final mural panel into place while Lance Harzman moves the bucket arm so he can work from the top.

Mural Society members decided to try a different method that may be longer-lasting. Lance Harzman was commissioned to reproduce Gray's painting on vinyl printed at his business. Four vinyl panels, mounted on aluminum composite and measuring four by ten feet each, make up the mural. Thursday afternoon Harzman and Kelly Schrock mounted the final panel on the east side of the Share Annex at the Cherokee Strip Museum on 14th Street in Alva.

Richey says the original painting by Gray will eventually be framed and displayed on the second floor of the Runnymede by the elevator.

The Alva Mural Society was originally founded by Beverly and the late Wayne Kinzie along with Betty and the late Fred Wenninger. After Beverly Kinzie stepped down, Brenda Hood took on the role of president. The organization is still being generously supported by Betty Wenninger.