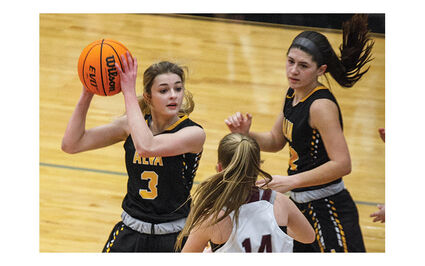 Lady Goldbug Mason Bogdanovecz (3) keeps the ball away from the Perry defense with teammate Chloe Durkee trying to assist.

The home court advantage wasn't a factor Friday night as the Crossings Christian Lady Knights were clearly out-matched by the Alva Ladybugs. Alva lost to Chisholm in the first round of the regional playoffs while the Lady Knights lost to Oklahoma Christian School on Thursday to reach this second round game.

After some cold shooting, Alva's Cynthia Samaniego scored on back-to-back baskets. Chloe Durkee was fouled as she tried to put back an offensive rebound and made both charity shots. Camden Furnish sank a three for the only Crossings Christian points of the quarter. After pulling off a strip steal, Samaniego went to the hoop for two points. Alva led 8-3. Freshman Carly Argo dropped a three-pointer through the basket from the left wing. Durkee added another trey, and Argo finished out the quarter with a second three-pointer. Alva led 17-3 at the end of the first period.

Gracie Maschmeier scored a basket for the Lady Knights to open the second quarter. Argo hit her third trey of the game. Alva senior Rianna Clark scored a basket followed by one from Lady Knight Brooklyn Boren. Alva now led 24-7. Clark widened the gap with two more baskets while Boren added one for the Knights. At the half, Alva was on top 28-9.

The Ladybugs continued to dominate, starting the third quarter with five points on a Durkee trey and a Samaniego basket. Aubrey Darter got on the scoresheet with a basket for Crossings Christian. Argo hit her fourth three-pointer of the night, followed by two points from Furnish. Durkee sank a trey, and Alva led 39-13. Mason Bogdanavicz was fouled and went to the line for two points. Morgan Heath added two more free throws for Alva. Clark chimed in with a basket. Freshman Triniti Miller finished out the Alva scoring with two baskets for a 49-13 lead at the end of the third period. 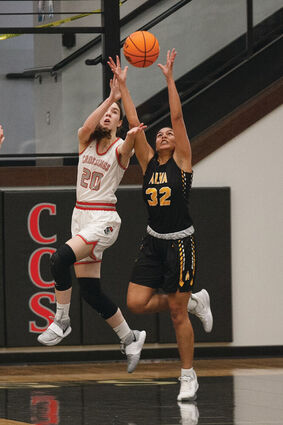 Lady Goldbug Rianna Clark (32) races to the ball to intercept it from Crossing Christian during Friday's game.

By the fourth quarter, Coach Horn was substituting freely from the bench, giving younger players a taste of the playoffs. Miller opened scoring with a one and one chance from the charity stripe and made both. Lady Knights' sophomore Anna Holden hit a basket. Game play really showed down with the younger players of both teams on the court. Aubry Rose had her chance at the free throw line and made both shots for Alva. Miller added another Ladybug basket. Maschmeier hit one of two chances from the free throw stripe for the final score. Alva won 54-16.

Leading the Ladybugs in scoring was Argo with 12 followed by Durkee with 11 and Samaniego with 10. Clark had eight, Miller seven, Rose five, Heath two and Bogdanavicz two.

Crossings Christian was led by Furnish with five, Boren with four, Maschmeier with three, Darter two and Holden two.

The Lady Knights ended their season with the loss. The Alva Ladybugs improved their season record to 11-10 and won the chance to continue in the playoffs. Alva, ranked 17th in 3A, was scheduled t meet Perry, ranked 6th in 3A, at 1 p.m. on Saturday. The winner of that game will continue to play in the area tournament while the loser will be finished for this season.