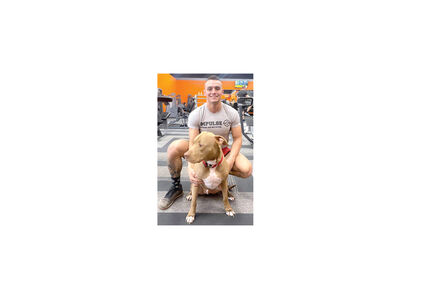 South Barber High School graduate Peyton Yandel tells of how he and his gym Impulse Fitness survived Covid closure. The No. 1 best client at his gym is Yandel's beloved dog Doug.

"I'm literally living the dream," Peyton Yandel said of owning his own gym and surviving despite Covid restrictions. What's his secret? Building on a foundation of relationships, dedication and hard work.

"I wake up at 4:30 in the morning and come to the gym," he said. He's usually there till about 7 p.m. "It's a long day, but I get to do what I love and the majority of people can't necessarily say that."

A 2015 graduate of South Barber High School in Kiowa, Kansas, Yandel was a top athlete even as a young kid and had aspirations of playing college football. That is until he broke his ankle as a junior and then tore his ACL as a senior.

Those injuries didn't stop his spirit or drive to excel and be fit or to fulfill his dream of 10 years to open a gym. Pursuing higher education at Butler Community College and WSU his study was exercise science. Living in Wichita he worked at a gym, built lasting relationships and ventured out on his own. He opened Impulse Fitness in January 2020 at Park City, never dreaming he'd be forced to close down for two months after only being open two months.

But he was determined to succeed. He offered daily group workouts through a Facebook group. Featured recently in the Park City Post as "survival of the fittest," Yandel said, "I'm extremely thankful because 95 percent of my members at the time paid me for two months out of their own pocket. It's basically what allowed me to keep my doors open."

In this Covid world, Yandel said he spends so much of his time cleaning the gym. "We have tons of hand sanitizer everywhere. It's what we have to do to stay open!"

Yandel does personal workups for his clients. He is into nutrition and also promotes it to his clients. "I help people get their diets in check." Since 2016 he's worked part time at Supplement World.

He's built his clientele to 260 members and it's still growing. "I've built great relationships and friendships with my members. It makes them want to come back. I love the relationships I have. I've yet to get tired of doing it." His members are a mixture of guys and girls typically age 20 to 35.

However, his parents and other family and friends of various ages also like to work out in his gym. Yandel thanks his family "for literally sticking their neck out for me." His mom Marlo Rugg and step-dad Alex Rugg reside in Park City. He credits Alex for initially getting him interested in fitness and for his continued motivation. He also thanks his dad Mike Yandel of Park City for his support. His proud grandparents Mario and Delores Moreno still reside in Kiowa.

Yandel's gym is 3700 square feet. He describes it as a "small community style gym." It features tread mills, a wide range of cardio equipment, different bikes, a stairmaster, ellipticals, bar bells and 13 different resistance training machines, etc. His gym is available 24-7 to clientele with a key fob system.

"I can see myself doing this for a long time," Yandel said. "I want people to look and feel the best they can." Looking to the future, he said, "I want to expand. I'm in talks now with the building owner to expand in this building. My gym will keep growing."