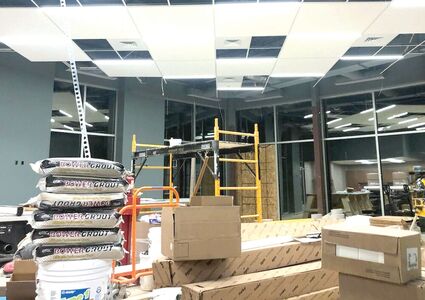 Although there re still lots of little things to do, the new 2000-square-foot physical therapy gym at the Kiowa District Hospital is almost finished and is to open March 29. The ceiling and tall windows (you can't see in) make the room inviting.

March has arrived and that means the Kiowa District Hospital (KDH) new Therapy and Wellness addition is almost finished. CEO Janell Goodno told the board at the February 23 meeting that the addition is to be finished before the end of March. In fact, she said they plan to move in to the new addition on March 26 and open on March 29.

The board approved a resolution authorizing sale of revenue bonds for the $900,000 USDA loans. KDH can save another quarter of a percent on interest if they can close the loan before the end of March.

Goodno told the board she is excited that South Barber USD #255 is putting in a daycare in the new storm shelter/multi-purpose room. "I'm working with the school and Dr. Miller (superintendent), but we still have an extensive waiting list."

A survey shows the need just for hospital employees' children that there are 25 to 30 children in need of daycare. USD #255s daycare is limited to about 12 children, based on a formula of ages. The KDH daycare would be considered home-based and could take 18-20 kids. Goodno said since KDH is a Critical Access Hospital (CAH), they could put the daycare on the cost report as an employee benefit. That means they can get an 80 percent reimbursement on their daycare investment. Goodno said they would discuss the subject further in executive session.

KDH Financials and Statistics for Hospital and Manors

Additionally, The Friends of the Hospital and Manor Foundation made their transfer of $526,138 to the hospital for the new PT and Wellness Addition. So, the total of non-operating revenue was $588,417. This made a gain of $508,519 for the hospital in January.

The board approved the financials and statistics and also the bad debt to turn over to collections.

Clinic Manager Volker updated the board on the Covid vaccinations they had administered up to the day of the meeting: Pfizer, 45 times 2, completed; Moderna 367, still to administer some of the second doses. Not included in those numbers are vaccines administered to residents and employees at the manor, about 22. All residents have been vaccinated or have the antibodies after recovering from having Covid.

Goodno said Barber County is in the green now, meaning a reduction in Covid cases. She said they may be able to slowly reduce some of the Covid protocols.

In the hospital administrator report, Goodno said the audit was finished last month. She complimented newly hired Shannon Canaday, comptroller saying, "I couldn't be happier with her." Canaday works directly with Goodno.

The CEO said KDH hired a facilities director, Brad Applegart. He will report to Manor Administrator and IT Director Phillip Anton and train with the maintenance team. 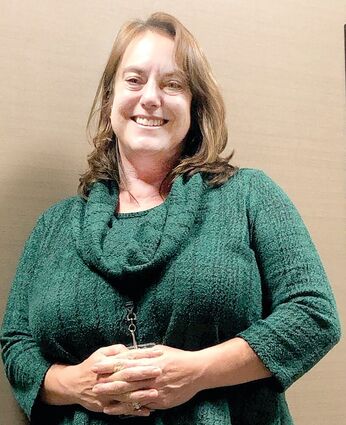 Shannon Canaday is the newly hired comptroller at KDH and works alongside KDH CEO/CFO Janell Goodno.

In Anton's absence from the meeting, Goodno reported on the manor. "I have big news about Phillip." She told that he passed his Long Term Care (LTC) national exam. He had a temporary license but now has his permanent National LTC license.

The next meeting of the KDH Board of Directors is Tuesday, March 23.