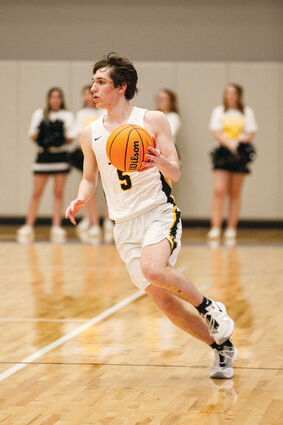 By the time basketball teams reach the area tournament, every game is a tough one. The Alva Goldbugs showed they were up to the challenge Thursday afternoon, knocking off the Cascia Hall Commandos 52-46 in Hennessey. It was the first area win for the Alva team since 2014.

The Goldbugs used a strong defense to force turnovers and bad shots while Austin Reed had a hot afternon to lead scoring with 23 points. Alva pulled ahead 14-10 in the first quarter and maintained the lead with a halftime score of 25-19. The Goldbugs scored 12 points to Cascia Hall's 11 in the third to lead 37-30. In the final period, the Commandos put forth a big effort, holding Alva to two baskets and forcing Goldbug trips to the foul line. Alva continued to lead although at times the margin was only one point. Chuck Shelite found himself at the free throw line six times, scoring almost half of the Goldbug points in the fourth quarter. Meanwhile, the Alva defense kept Cascia Hall contained for the final 52-46 win.

Alva had two good chances that didn't go before Cascia Hall got on the scoreboard with baskets by Grant Holley and Mason Shiflet. Jackson Feely passed the ball to Reed who scored two for Alva. Holley made another basket, but Reed sank a three from the right corner to pull within one at 6-5.

Ben Radford widened the margin with two, but Reed put up a runner to answer. After fouls on both sides and a Commando turnover forced by Phillip Randall, Reed scored again to give Alva the lead at 9-8. Holley ran over Jaxon Jones on his way to the goal to score and take the lead. Jones turned around and hit a basket on a Feely assist to put Alva up 11-10. Just before the quarter ended, Kyler Penco sank a deep three-pointer for a 14-10 Goldbug advantage.

In an apparent attempt to slow him down, Tyler Westbrock fouled Reed as he went for a shot. Reed hit both free throws. Reed then picked off a pass and drove for the goal and another two. Alva led 18-10.

There followed a dry spell with Radford and Feely missing shots. Reed tipped a pass for a turnover, and Reed's shot was an air ball. Both teams tried for three-pointers that didn't go.

Finally as Reed went to the rim, he was fouled and hit both shots to widen the Alva lead to 20-10. Reed's three-point attempt didn't go, but Holley sank a trey from the left corner. A couple more Commando attempts to score failed. Kaden Slater came in for the Goldbugs and promptly sank a three-pointer. Alva now led 25-13.

Radford was fouled and hit both free throws to put Cascia Hall within ten of the lead. Holley added two and Darby two. Despite some attempts by both teams, that was the final score of the half. Alva led 25-19 going into the break.

Holley led off the third quarter with a basket. Both teams defended well, with no scoring until Reed was sent to the charity stripe. He hit one of two, and Alva led 26-21. Randall scored on a Reed assist, and Reed put in a three-pointer from deep wing left to widen the scoring gap. Alva was now up 31-21.

Radford scored for the Commandos and was fouled, sinking the free throw as well. The margin was now seven. Feely went in for a layup that didn't go, but he grabbed his own rebound and stuck it back through the hoop. Shiflet scored for Cascia Hall, and Feely answered with a jumper. The Alva lead was 35-26.

Kyler Penco was fouled by Holley and made both of his shots from the charity stripe for Alva. Commando Spencer Forbes got on the board with a basket. Aidan Welsh drove to the rim for a basket. Time expired with Alva up 37-30 at the end of three quarters.

After an Alva turnover and a couple of failed shots, Holley went for a three-pointer and was fouled. He made all three free throws to put Cascia Hall within four at 37-33. Shiflet sank a basket to narrow the lead to two.

Radford's three-point attempt failed, and Feely was fouled while fighting for the rebound. He went to the line and made one of two chances. Then Shelite was fouled, hitting one of two. Hofen grabbed the rebound, and Shelite had a chance to score but was fouled. This time he hit both shots. The Alva lead had widened to 47-40.

Shelite was at the free throw line again, making one of two. He got his own rebound and was fouled. This time he hit both tries. Penco was fouled and hit one of two chances. The Goldbugs now led 51-40. Holley scored a trey for Cascia Hall, but the clock was winding down. Shelite made one last trip to the charity stripe, making one of two shots. Darby sank a final three for the Commandos, and Alva won 52-46.

Reed led the Goldbugs with 23 points followed by Shelite's seven, all on free throws. Feely also had seven while Penco had six and Slater three. Hofen, Randall and Jones each scored two points. The Goldbugs are now 16-10 for the season.

The Goldbugs continue in the Class 3A area tournament to play the winner of the Oklahoma Christian School vs Star Spencer game, being played at 8 p.m. Thursday. The tip-off for Alva's second round area game will be at 3 p.m. today (Friday) in Hennessey.