• Alva is headed to state playoffs 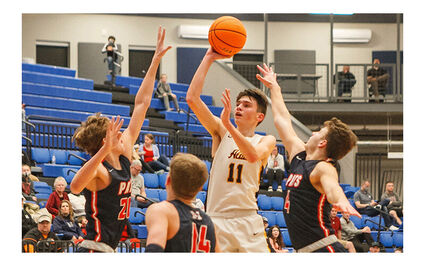 The Alva Goldbugs staged an exciting comeback in the final quarter Saturday night to defeat Metro Christian 53-51 and win a berth in the state playoffs. Alva fans held a honk-off to send the team on their way earlier in the afternoon as they left for Hennessey. Plenty of fans made the trip and were vocal in support of the Goldbugs throughout the game.

The Alva team struggled in the first quarter, scoring only two points to 11 for Metro Christian. Jackson Feely sparked the Goldbugs in the second to pull within 13 at 31-18 at the half. The Patriots outscored Alva by only three points in the third. In the final period, Metro Christian seemed to fall apart with Alva pouring in 25 points to seven for the Patriots.

Alva gained possession at the tip, and Braden Hofen was fouled. He made one of two shots to put Alva on the scoreboard. Malachi Penland went to the charity stripe for Metro Christian but missed both tries. Patriot Ian Sluice sank a three-pointer for a 3-1 lead. Alva got one more point from Daylon Malone's free throw. The remainder of the quarter belonged to Metro Christian as Alva could not get anything through the hoop. The quarter ended with the Patriots up 11-2.

In the second quarter, Metro Christian ran the score up to 19-2 before Chuck Shelite hit one from the free throw line for Alva. Hofen scored two points, and the Patriots led 19-5.

Metro Christian hit back-to-back threes to increase their lead to 25-5. Goldbug Jackson Feely caught fire, hitting a basket and two free throws. After a trey from Jackson Sowards, Feely scored another basket to pull within 17. With a little over two minutes left in the quarter, Sowards was fouled and hit one of two shots. Alva freshman Daylon Malone scored a basket followed by one from Patriot Mario Darrington. Feely hit a basket and a trey to finish the half with Metro Christian leading 31-18.

Feely started off the third quarter with an Alva basket. The ball went in and out for Penland, and Austin Reed attempted a three pointer for Alva that didn't go. Patriot Evan Grantham scored two baskets to increase the Metro Christian lead to 35-20. Chuck Shelite scored two for Alva, and Grantham added another for the Patriots. Malone got the ball through the hoop and was fouled. He made the extra point, and Alva was down ten at 37-27.

Shelite made a drive to the rim and was fouled. He made one of two free throws. Sluice and Sowards hit baskets for Metro Christian while Alva's attempts didn't make it. At the end of the third, the Patriots led 44-28.

With a 16 point deficit going into the final period, the Goldbugs didn't let up. Reed stole the ball and scored. Feely made a basket and was fouled, hitting the free throw. Feely went to the charity stripe again and made both points. Alva was now within nine points of the lead, and Metro Christian called for a timeout.

Sowards scored a basket and was fouled, but he missed the free throw. Reed scored two for Alva to pull within 11 points of the lead. Sluice sank a three to increase the margin to 12 at 49-37. Feely's basket didn't go in but he was fouled. He missed both tries. With five minutes left in the game, Penco hit a right wing three, and Alva was again within nine. Grant Gessert was fouled while making a shot and hit both free throws. Hofen and Shelite hit baskets for Alva. Feely was called for his fourth foul. Then Feely was fouled and hit one of two from the charity stripe. Alva was now six points behind.

After misses by both teams, Darrington went to the free throw line for a one-and-one. He missed. Feely sank a basket off the glass to put Alva within four. Darrington missed another free throw. Penco sank a three for Alva to pull within one at 51-50.

Following a timeout, Metro Christian had the throw in, but Reed picked it off. Penco scored on the layup, and Alva led 52-51. After a couple of scoring attempts by the Patriots, Alva called a timeout. 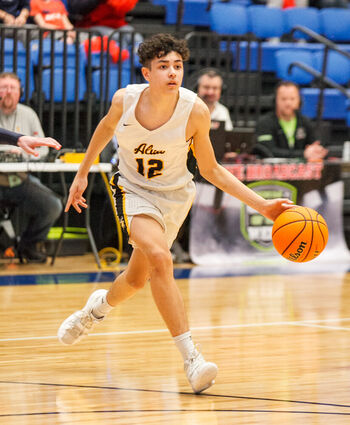 Goldbug Kyler Penco (12) dribbles down the court determined to get to the basket.

Reed was immediately fouled and hit his first free throw. Timeout was called. Back in the game, Reed missed the second try but the clock was running down. Sluice's throw at the buzzer missed, and Alva won 53-51.

Jubilant Head Coach Shane Feely gave his son a big hug as the team celebrated. With an 18-10 record, the Goldbugs are headed for the state quarterfinals in Yukon next Thursday. Official brackets will be released Sunday by the Oklahoma Secondary Schools Activities Association. The last time the Goldbugs went to state was in 2006.

Looking at Alva scoring, Feely led the way with 21 points followed by Malone and Penco who had eight each. Shelite made six points while Reed and Hofen scored five apiece.

For Metro Christian, Sluice was the leading scorer with 13 followed by Brady Cox with nine. Sowards and Gessert had eight each, Derek Serage had three and Darrington two.