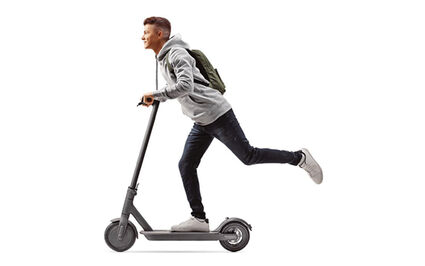 Bird Scooters are coming to Alva soon. A representative of the company spoke to the Alva City Council Monday.

After an attempt at a video conference appearance failed, Shoemaker spoke to the council via speaker phone. She said Bird plans to bring a fleet of 50 electric scooters to Alva but will increase the number if there is a need. There is no cost to Alva.

Bird recently located fleets in Weatherford and Bartlesville where they are seeing strong results. They are also working on establishing the service in Enid where the city was updating ordinances for the scooters.

Councilmember Daniel Winters said he's heard of issues with scooters left lying on streets, in parking spaces and on sidewalks. He asked how that can be prevented.

Shoemaker used the example of the Wild West when everyone rode horses and then automobiles were introduced. "Things were chaotic in the beginning, and then we found ways to integrate automobiles properly into society." She said Bird was the first company to introduce the dock-less, mico-mobility solution four years ago. "In the beginning there were little hiccups, but since then we have improved the way we enter into cities."

Using the analogy of training a puppy, Shoemaker said when Bird enters a new city, they need to train and educate the population and scooter users. There are situations that require a quick response, like a puppy chewing on a shoe. She indicated this will be handled by the local manager. The local fleet manager, a contract position, is responsible for the scooters and earns a portion of the income from them. A portion of the income also goes to pay off the vehicles. She said this incentivizes the manager to make sure the scooters aren't left lying around and are kept in good repair.

All users will go through educational training, and they will be taking a picture of how their scooter is parked which will help eliminate problems.

"Will Bird zone areas?" asked Councilmember Brandon Sherman. He said when you ride in Tulsa there are certain areas where the scooter just shuts off.

"We have the most advanced technology of any provider," said Shoemaker. The local account manager will be able to implement "no ride" zones permanently or add temporary zones if the city is having a special event like a Fourth of July celebration.

"Playing devil's advocate here, you've got some kid who thinks it will be funny, throws it in the back of his truck, rides around town and throws it off in a canyon somewhere," said Councilmember Chris Eckhardt. "Do you have GPS coordinates so you can find them if they're missing?"

"Absolutely, that's a big thing for Bird. We do not want to lose vehicles," said Shoemaker. "Each vehicle is about $600 from a cost standpoint." The local manager is paying for that cost out of their earnings. They will get silent alarms to their phone if a vehicle is moving without it being a paid ride. The manager is expected to respond right away to avoid any theft or vandalism.

"In Yuma, Arizona, we just had a launch. A fleet manager got an alert and was able to quickly respond," she said. "Someone had put a vehicle in a shopping cart and was trying to bring that home with them. They were able to quickly stop that from happening because of the alert."

"How is it handled for access to the highways?" asked Councilmember Randy Stelling. City Business Manager Angelica Brady said state law does not allow these scooters on highways so those would be no ride zones. She said riders can walk the scooters across highways.

Shoemaker said scooters could have notifications warning they cannot be ridden on US-64 or US-281 with riders being asked to walk the scooters across. This would allow someone traveling from the Northwestern Oklahoma State University campus to walk the scooter across in order to ride downtown.

No action was required by the council, and there will be no cost to the city.

Riders use Bird's smartphone app to register, set up a credit card payment and begin their ride with the scooter next to them. Using the app, they can also find the closest scooter in the area.

After unlocking a scooter, they scan a QR code with their phone, complete a brief video tutorial, kick back the stand and ride off.

Each ride costs $1 to start plus a fee of 30 cents per minute. Riders must be 18 and older. Rides typically last one to four miles, but the scooters have a battery life of up to 30 miles. Once the ride is over, the customer receives instructions on where and how to leave their vehicles.

State law allows scooters to be ridden on streets as long as the street's speed limit is 25 mph or under. Like bicycles, scooters should not be ridden on sidewalks where they might encounter people walking.