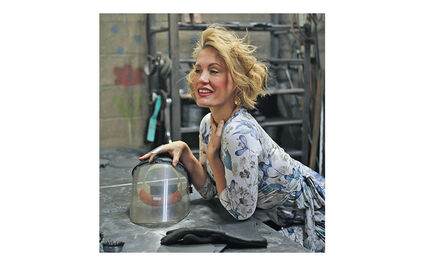 In her early twenties, Liz Anderson was facing a drastic salary cut while living in a foreign country. Due to a military coup in Thailand, the pay for Anderson's job teaching English was cut to $250 per month, not nearly enough to live on.

While she could have returned to her native Oklahoma, she said she "adored my students" and was unwilling to abandon them. She had to find a way to supplement her income so she could continue to teach. Anderson traded English lessons to a shoe cobbler who agreed to teach her about working with leather and doing sterling silver wire wrap.

Being fluent in the Thai language, she was able to learn about gemstones and how to buy them wholesale in the Thai market. She began to sell her creations to tourists and eventually opened up shops in Koh Pangan and Koh Lanta while continuing to teach English.

"I think that in most third world countries (that are Buddhist), children are brought up knowing that 'we as humans are all artistic.' We just have to find the right outlet. But in southeast Asia, they also have to 'hustle' to make money for their families, so I think the motivation to create art is more imperative," she says.

"They don't have time to have those 'artist blocks' or 'wait until they feel inspired.' They need to just create immediately, and I think that urgency actually relieves some of the creative pressure most artists feel. I quite love that I learned this way."

With an urge to see more of the world, Anderson spent her summer breaks traveling to various countries, always arranging a deal to teach in exchange for free lodging. Then she would find a silversmith or artisan in town to teach her about their artistic style.

In Nepal, she taught ten miles from the Tibetan border. She would hop on the back of a motorbike driven by a student's parent who was a gemstone dealer. She and the dealer would meet with Tibetan ladies selling turquoise and red coral at the Nepal-Tibetan border. From this experience, Anderson learned to identify qualities of gemstones, proper price points and how to spot a fake gem.

In Istanbul, she taught Syrian refugee children. One of the parents collected ancient Arabic and Urdu coins, and she inspired Anderson to research antiquities.

While she was teaching and traveling, Anderson lived in homes her friends lovingly described as shacks. She slept in tents or on crappy blowup mattresses on floors of one-bedroom apartment with no hot water and squat toilets. "But I feel so blessed and lucky that these sacrifices in comfort gave me the ability to teach children and travel and be artistically adopted by these talented artisans," she said.

Speaking of teaching at an all-girls school in Nepal, Anderson said, "You live in these highly impoverished areas and see a reality of life that you never had to confront. Their first source of education was in 2004; they can rarely afford to buy meat; they have no sense of looking too far into the future to plan their lives. And yet, they don't mope and complain.

"I think Nepalese people are so notorious for really living for the day and finding the silver-lining of each and every moment."

"I love blending antiquities with gemstones and revamping them with modern, romantic shapes," says Anderson. "My favorite item is the 17th century Indian coin issued by this queen named Nur Jahan. She was the only woman in India's entire history who was ever permitted to issue her currency. She was the ultimate feminist!

"After she died, Nur Jahan's stepson (the man who built the Taj Mahal) issued rewards to people who would help gather his stepmother's coins, and he tried to burn them all. Her lively coin is quite rare, in Urdu calligraphy and is sterling silver."

One of Anderson's favorites is a "very cool necklace with Sri Lankan sapphires" which she wears every day.

Although she designs jewelry on her own, Anderson said making connections with her clients and creating custom pieces together is her absolute favorite part of the process. "Finding out about their backstory, I immediately start searching for coins or artifacts that speak to their heritage and interests."

Drawing up rough drafts of design options, Anderson shows her clients combinations of gemstones. Often her customers suggest alterations which may be something she never considered, "so I get to learn from the process too!"

Eventually Liz married and had two children. She and her American husband held official residency in Portugal, but her husband was working on an oil rig in Qatar.

Then the coronavirus pandemic hit. The borders into Portugal were being closed, and she feared her husband wouldn't be able to come home. After ten years in Asia and Europe, Anderson got on a plane alone with her sons, ages 1 and 4.

Covid was new, and no one knew exactly how to prevent being infected. Anderson said it was a "horrid" flight. None of the flight attendants would help because they were fearful of touching passengers.

Every diaper change and every toddler bathroom run included all three of them, Anderson and her two sons, shoved into the tiny airplane bathroom. She said the flight attendants did feel bad for her and slipped her extra tiny bottles of vodka.

Anderson and her sons quarantined with her parents in Tulsa. Her husband was stuck in Qatar, and they didn't see him for four months.

Once he arrived, he needed a job. They searched and found employment for him in a "town called Alva." That's how this family of international travelers ended up in northwest Oklahoma.

"We really like it here," said Anderson. "People are so kind and hospitable!"

While homeschooling her boys, Anderson continues her metalsmithing. Her jewelry brand is Lady Daze which she markets mainly online. It's far different from selling to tourists in Thailand. She uses social media to showcase her work.

She says she has learned how to "relentlessly approach celebrities in the hopes that they will wear and love my jewelry." Among her customers is British actress Annabelle Wallis as well as American actresses Leven Rambin, Rebekah Graf and Mena Suvari.

Recently, Northwestern Oklahoma State University student Gracie Scarbrough of Alva modeled her custom jewelry in photographs by Brooke Fuller. The photos were for a feature in a French magazine, Moevir.

Look for Anderson at http://www.ladydaze.us, @ladydazefinejewelry or on Facebook under Lady Daze Fine Jewelry. 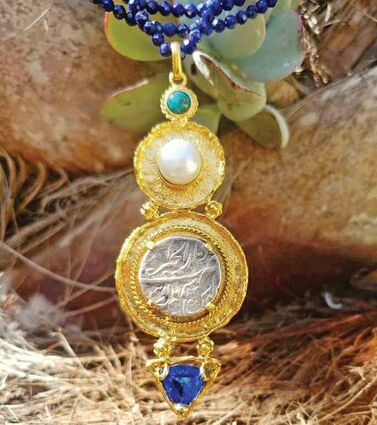 During the First Friday Art Walk tonight, April 2, everyone will be able to see some of Anderson's jewelry creations at the Graceful Arts Gallery in Alva.

It's the perfect opportunity to talk with one of Alva's newest and most interesting residents while admiring her custom metalwork jewelry. The event is from 6 to 8 p.m.