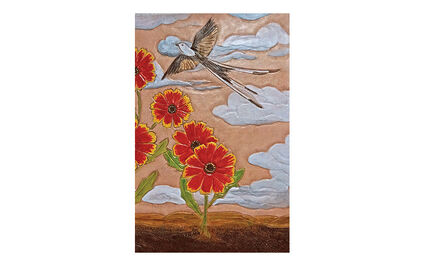 It all began when Jim Weaver's son saw some adult leaders at a Boy Scout camp tooling leather. Weaver and his son began taking free classes at the Tandy Leather Shop. After a few months, they "kind of put it aside."

Later Weaver went back to working with leather. "The projects got bigger and bigger as time went on, and the subject matter expanded," he said.

"Most of the people who tool leather are interested in kind of traditional western motifs like you'd see on saddles or gun belts. But I found there was a whole world of things out there that could be done with it."

In the beginning, Weaver worked with those traditional western themes, and he says even today his work is a descendent of western motifs. He does floral patterns, landscapes and western landscapes a lot. "We've gone to some of the iconic sites in the west like Monument Valley and Devil's Tower, and after those trips I'll incorporate those into my projects," he said.

During April, Weaver's work is on display at Graceful Arts Gallery in Alva. "What I have on display here is a project that I did last year, he said. "I spent six months researching cattle drives in places like the National Cowboy Hall of Fame in Oklahoma City and the Oklahoma History Center. I read a lot of books. I looked at things online.

"I developed these 17 pieces that depict a cattle drive beginning in south Texas and going all the way up to the railheads in northern Kansas. This was shown at the Chisholm Trail Heritage Center in Duncan for three months last summer. I made it specifically for the space where they wanted me to show."

Weaver said as the project evolved, he became more and more focused on the stories that the trail drivers left behind. "So the project does give a general overview of cattle drives, but I began to focus on the stories and the interesting things that happened along the way. There's a piece in it that shows where a panther came into camp one night and started feasting on some beef the cook had left out, and one of the night herders came in and shot the panther. But of course that started a stampede, and the cowboys were up for the rest of the night trying to corral the cattle back into their herd."

There are a lot of great stories out there, Weaver says. "A group from San Antonio put together this book called The Trail Drivers of Texas. There are probably 150 stories in that book. I have 17 pieces in my exhibit so I have 130 some more to do to get all those stories, if the project goes that long."

According to online references, The Trail Drivers of Texas was gleaned from members of the Old Time Trail Drivers' Association. It was first published in the 1920s and reissued by the University of Texas Press in 1985.

In addition to telling stories in his leather work, Weaver likes to remind viewers how the earth and its environment support human activity. His pieces often include a cut open view of the earth below the surface while the story is taking place above ground. 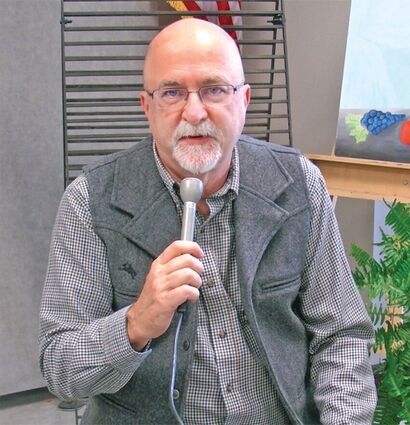 Leather artist Jim Weaver describes his work on display during April at Graceful Arts Gallery in Alva. See the video at www.AlvaReviewCourier.com.

You can see Weaver's exhibit during April at Graceful Arts Gallery, 523 Barnes, in Alva. To see more and keep up with his projects, follow him on Instagram at JimWeaver.ok or visit his web page at http://www.jww-art.com.

A video of Weaver talking about his leather art may be seen at http://www.AlvaReviewCourier.com.