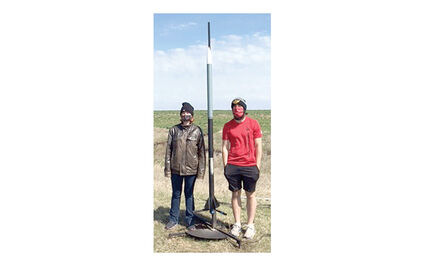 Members of the Northwestern Oklahoma State University Ranger Rocketry team competed alongside 15 other teams from 13 universities during the fourth Argonia Cup Collegiate Rocketry competition March 27-28 at the Rocket Pasture near Argonia, Kansas.

Dr. Steve Maier, chair of the department of natural science, professor of physics and co-sponsor of the team, is proud of the students.

"The team made great strides this year, and it was a pleasure working with them," Maier said. "They gained experience testing ejection charges, using sets of sheering pins properly for separate ejection charges...