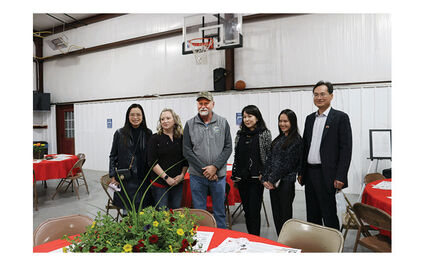 For over 30 years, Alva has played host to the Lieutenant Governor's Turkey Hunt. The annual tradition was called off last year due to the emerging pandemic, but this year, organizers were determined to make it happen.

Woods County Economic Development Committee Director Neal Williams led the charge with the help of a committee comprised of local community leaders. The mission is simple: recruit participants from various industries to take part in the hunt – not just to shoot turkeys, but to spend time networking. Mingling with the vast array of business leaders opens doors to new opportunities to attract businesses to the area.

SandRidge, Iofina and Vantage Plane Plastics are some examples of companies that participated in past hunts. This year's hunt was held last week, April 14-16, and boasted an impressive guest list. Some of the attendees included:

• Daniel McClure, deputy general counsel from the Oklahoma Municipal League, an organization that is an authoritative source for information, training and resources on effective local government at the state and national level.

• Thomas Hill, a retiree from the Boeing Corporation. Hill now serves as an aerospace consultant and works closely with Williams to bring the industry to Alva. Hill's son Sam joined his dad in the hunt.

• Rex Angle, director of sales at Burlington Northern Santa Fe in Fort Worth, Texas. The railyard in Avard was one of the first BNSF certified sites and the first one certified in Oklahoma.

• Doreen Lorinczi and Natalie Bay, with a company called Greater Commercial Lending (GCL) based in Reno, Nevada. GCL provides commercial lending services to entities across the nation, including the multi-purpose arena in Alva.

• Robert Higginbotham, president of the board of directors for the National Wild Turkey Federation (NWTF). Higginbotham, a member of the NWTF since the early '80s, is now an imaging director at Winston Medical Center in his hometown of Louisville, Mississippi.

• Jim Harris is a longtime supporter of NWTF. Each year at the NWTF annual meeting, an Oklahoma Lt. Governor Turkey Hunt trip auctioned off; Harris purchased the hunt with Alva's reputation in mind: it is distinguished for hunter success and renowned for superb hosting.

• Oklahoma Commerce's Stan Ralstin serves as a regional development specialist for northwest Oklahoma and attended the hunt along with colleague Sarah Short. Short is an international relations and foreign direct investment coordinator and a recruiter in the automobile industry.

Several of these guests came to see firsthand some of the projects taking place in Alva. A couple of others were on the list to attend but could not make it due to scheduling conflicts. 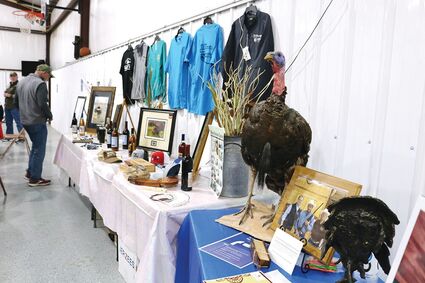 Tom the Turkey stands tall next to the display table at the Turkey Hunt. Some items are giveaways while others are auctioned off.

Williams said despite the challenges over the last year, the turkey hunt was a success. He gives a lot of credit to his wife Sonja (former WCEDC director) for being a strong force in helping prepare and organize the event. So many of what would have been face-to-face gatherings turned to Zoom teleconference meetings because of Covid-19, making networking a little more challenging.

"We are happy to pick back up on the Turkey Hunt tradition after last year's setbacks. Hosting a diverse group of people, building connections, and ultimately watching Alva grow is something we will be doing long into the future," said Williams.