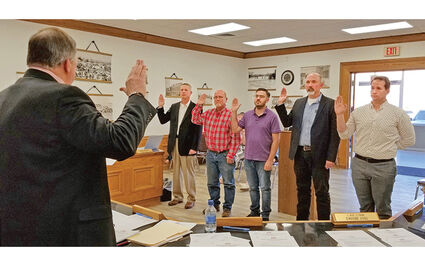 Before new city officials could be sworn in Monday, the Alva City Council had to certify the results of the April 6 election. Enough of the councilmembers needed to be present to make a quorum or majority. Seven of the eight were present. After the election returns were officially received, Dr. Bo Hannaford and Brian Wallis left the council table. Chris Eckhardt did not attend.

After the new councilmembers took their seats, Mayor Kelly Parker asked for nominations for a new president of the council. He explained the president chairs council meetings when the mayor is absent and can also serve in an interim capacity if the mayor becomes unable to fulfill his duties.

Councilmember Brandon Sherman made a motion to elect Randy Stelling as council president.

"If we have a moment for discussion, I just wanted to proffer a few ideas if the board wanted to consider them for discussion," said Dowling. "I just want to say that especially with this election above all at this moment because of the perception that the public has of this council, wrongly or rightfully, I think it is important as a committee that we restore the trust that citizens have in use. And I think the easiest one way to do that is to elect somebody who was not here when the previous business manager existed.

"The other thing that I think is important to consider for this position is, in that vein, I think it should be a new position for the city councilman, president, if that's the correct title (Kelly Parker: council president) for him to help attend the events that are publicly sponsored and that the money we donate to these different charitable events goes to. I think that they should make a special effort above all others on the part of this council to attend those so that they can show and speak to what we do with the community. That's why I think in that regard, I suggest that we nominate Greg Bowman. He's a new face and somebody, I think, whose opinion and I think he relates well to the public."

Councilmember Winters said, "I would say with the experience and the ability to lead the meetings and the longevity, Randy being the longest serving member on the council currently, I'd like to second Councilman Sherman's motion."

Turning to Sherman, Dowling asked, "Were those kind of the same points that led you to originally nominate Randy?" Sherman answered, "Yes."

Looking at Stelling, Dowling asked, "I assume that is something that you would be interested in, serving in that capacity?"

With no further discussion, Mayor Parker called for a vote. Stelling was elected council president with a vote of 6-2. Dowling and Brooks voted no.