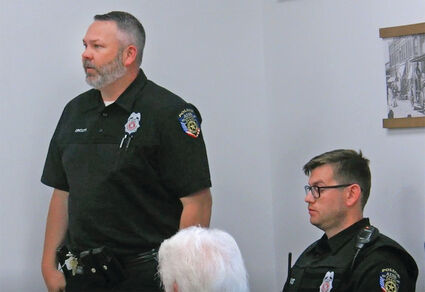 Alva Police Chief Ben Orcutt (left) tells the Alva City Council about a $10,000 grant that paid for ten new body-worn cameras like the one worn by the seated officer.

The Oklahoma State Auditor and Inspector's Office recently conducted an audit of the City of Alva. It was conducted in response to a citizen petition. The cost of the audit comes out of the city's budget. Monday night, Councilmember Brandon Sherman reported the cost was $5,093.75.

Sherman, reporting on the council's Finance Committee meeting, listed several other large claims that were among those approved. Garnett Oil was paid $6,841.31 for bulk fuel. Ascent Aviation Group, Inc. was paid $18,230.42 from the airport fund for aviation fuel. The cost of sanitation (trash) transfer fees at Re...