The Birds have arrived 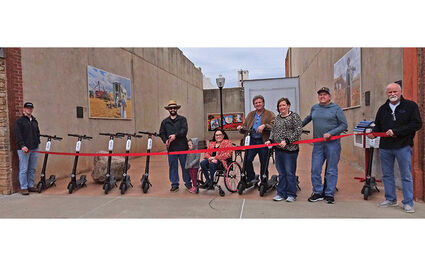 You may already have seen people zipping around on the speedy two-wheeled scooters. The Bird Scooters began appearing in Alva early last week. Thursday morning, a ribbon-cutting held by the Chamber of Commerce officially marked their arrival. Local manager Jeremy Darr lined up several of the scooters at the pocket park on the north side of Alva's square of ceremony. His young daughter, Alex, accompanied him and snagged a piece of the red ribbon to take home.

There is no physical building for the new addition to Alva. It's more of a mobile operation. You'll find the scooters in various locations around town. Darr tracks their locations through a GPS map. He's responsible for recharging their batteries and for maintenance.

Riders use Bird's smartphone app to register, set up a credit card payment and begin their ride with the scooter next to them. Search for Bird or Bird Scooters. Using the app, they can find the closest scooter in the area. 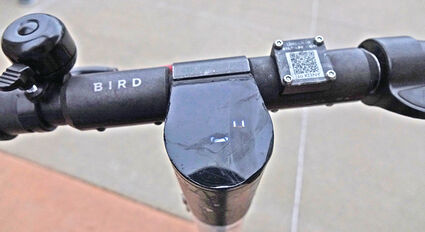 A closeup of the Bird Scooter handlebars shows a bell at the left, the QR code for activation and, at right, the speed control.

After unlocking a scooter, riders scan a QR code with their phone, complete a brief video tutorial, kick back the stand and ride off.

Each ride costs $1 to start plus a fee of 30 cents per minute. Riders must be 18 and older. Rides typically last one to four miles, but the scooters have a battery life of up to 30 miles. Once the ride is over, the customer receives instructions on where and how to leave their vehicles.

Using GPS, the scooters have some "no ride" zones set up. These include highways like US281 and US64 in Alva. Riders can step off their scooter and walk it across the highway.

State law allows scooters to be ridden on streets as long as the street's speed limit is 25 mph or under. Like bicycles, scooters should not be ridden on sidewalks where they might encounter people walking.