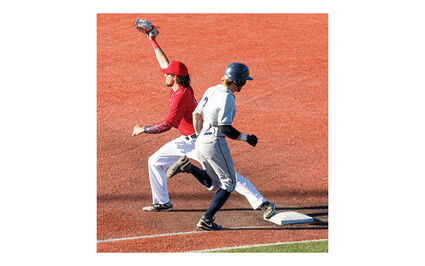 Northwestern's first baseman Blake Hoffman (12) catches the ball and was able to get Southwestern's Marc Gonzales (3) out.

ALVA, Okla. – The Red and Black opened their three-game series with rival Southwestern Oklahoma State Friday night. It would take 12 innings before the Rangers walked off for the third time of the season. The win clinches the team's first-ever GAC playoff berth. Northwestern scored in the first three innings of the game to open an 8-2 lead before winning in the 12th inning.

The win improves the Rangers record to 23-12 on the season with an 18-10 Great American Conference record. The Bulldogs drop to 20-13 on the year with a 16-12 conference record.

Scott Creedon took the ball in game on...