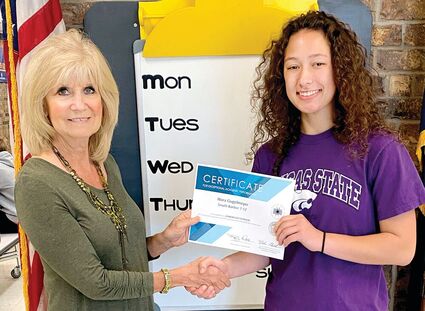 South Barber senior Nora Gugelmeyer receives a certificate from the school counselor Kathie Kersten. The certificate is Gugelmeyer's recognition as an ACT (American College Test) Scholar. Her exceptional academic performance of earning a 32 or higher on the ACT earned her this prestigious honor.

Scoring a 32 or higher on the ACT (American College Test) earned Nora Gugelmeyer recognition as an ACT Scholar. She is a senior at South Barber USD 255 and will graduate as the Class of 2021 Valedictorian Saturday at 2 p.m. She's received multiple scholarships.

Nora is the daughter of Kim and Chad Lyons and Steve Gugelmeyer. Next fall she plans to attend Kansas State University and major in accounting.

She's been highly involved in numerous activities throughout her high school career. She's senior class president, FCCLA president, NHS president, and Cloverleaf 4-H secretary. Gugelmeyer was football homecoming queen and was also active in scholar's bowl, band, drama, volleyball, basketball, and track. She made the honor roll every quarter, received her bronze, silver and gold honor pins, and was inducted into the National Honor Society in 2019.