'Flowers are my thing' 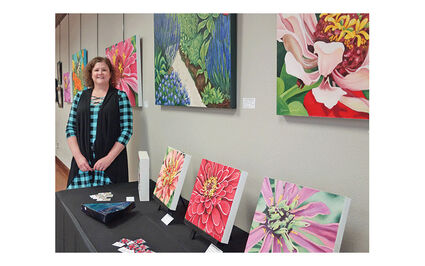 Sharon Sudduth of Enid enjoys painting flowers in large and small sizes. Her work is on display this month at Graceful Arts Gallery in Alva.

Somehow through all her high school and college art classes, Sharon Sudduth never remembers taking a painting class. Growing up in Kansas, she was "exposed to design and drawing and ceramics and wood carving, but I don't recall ever painting."

She went to college with the first year on an art scholarship. "I took another drawing course, another pottery class, another design class," she said, "but still no painting."

After college, she worked full time but didn't use her art experience except when she worked in interior design. Her last full time job was as a chamber of commerce manager for seven years.

About ten years ago, she and her family moved to Oklahoma and now live in Enid. After moving she no longer worked full time and decided to pursue her creative dreams. "I had seen some mixed media by another artist," she said. After learning from some videos on YouTube, Sudduth said she pursued that every day "like a job."

After about a year, she felt she was running out of things to do. "So I decided, 'I'm an artist.' I should be able to paint something without just using cut out paper of other people's designs to make a collage."

Sudduth began using acrylic paint. "Really flowers are my thing," she said. "I did a lot of florals. I did paint a few other subjects but mainly flowers."

In 2016 she took an online course from nationally known artist Donna Downey. "She gave me a couple of pieces of advice that got me to that next level," she said.

Following Downey on social media, Sudduth noticed her work was changing. "What I found out was that she had switched from acrylics to oil, and I couldn't believe the change that it made in her work. I wanted the same thing."

Downey offered an entry level oil painting class. Sudduth approached the subject with some trepidation, "I was scared to death of oils. I thought you had to be super patient to be able to paint in oils. I never thought I could do that because I'm kind of impatient.

"That was 2018, and I believe it has really been the best part of my career as an artist."

When Downey did a challenge encouraging people to join her in painting a hundred faces, Sudduth joined in although she'd never painted faces before. "I painted a hundred faces, and shortly after that in 2019 had a solo show in the Paseo in Oklahoma City with my hundred faces," she said. "That was exciting!"

Like many others, Sudduth was affected by the pandemic. "Last spring when everything kind of shut down, I don't know where it really came from but I painted the biggest painting I had painted up to that point," she said. "That was my really large floral paintings, and I loved it! So that has kind of been my direction of my work since then.

"I've been told I'm a contemporary Georgia O'Keefe, but I don't really think it was an influence of hers. I went back to one of my favorite pieces I had made a college – a charcoal drawing of a very up-close tulip – and at that point I'm not sure I knew who Georgia O'Keefe was."

"That (large florals) has kind of been my passion," Sudduth said. "I do enjoy painting a large variety of subjects but the big flowers are definitely my thing."

During May, Sudduth's work is on display at Graceful Arts Gallery in Alva. Some of her colorful floral paintings have been reproduced on greeting cards.