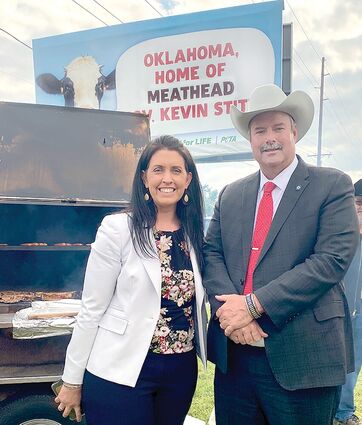 Oklahoma Sec. of Agriculture, Blayne Arthur, and Senate Agriculture and Wildlife Committee Chair, Sen. Casey Murdock, at Gov. Kevin Stitt's cook-out under a billboard on I-35 in Oklahoma City. The billboard, which says "OKLAHOMA, HOME OF MEATHEAD GOV. KEVIN STITT!" was rented by PETA as a swipe at Stitt's support of agriculture and meat consumption in the state.

You may remember a few weeks ago, I was author of concurrent resolution celebrating the importance of the production of beef, pork and poultry in Oklahoma. Combined, these producers contribute $18 billion annually to our state's economy. The resolution also encouraged Oklahomans to consume and enjoy meat and poultry, and coincided with a declaration by Governor Stitt, proclaiming "Meat All Week," which was in response to a "MeatOut Day" proclaimed by Colorado's governor.

Now the left-leaning organization PETA has rented a billboard in Oklahoma City on I-35 that says, "OKLAHOMA, HOME OF MEA...