Oklahoma Territory celebrates the passage of the Free Homes Act 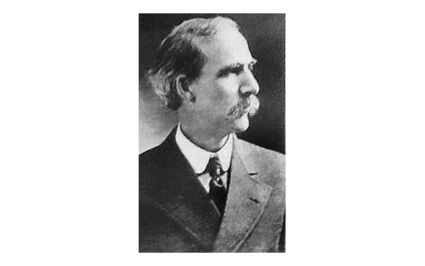 On May 17, 1900, President William McKinley signed the Free Homes Act into law. As a result of the law, $15 million in purchase price that was due to the U.S. government from homesteaders in Oklahoma Territory was waived. This would be the equivalent to nearly $450 million in today's money. It is hard to imagine the unity of purpose as this burden of debt was lifted from tens of thousands of landowners throughout the territory.

Celebrations immediately broke out all across the territory. The largest of these events was a three day celebration held in Alva over the Memorial Day weekend. It was estimated that the settlers in Woods County would save more that $2 million. On May 30th (Decoration Day) there was the largest gathering of old soldiers ever held in western Oklahoma. May 31st was set aside as Free Homes Day. People from Woods, Woodward, Beaver, Grant and Garfield counties were invited and attended.

Businessmen in Alva raised $500 to make the event free to all attending. Events included a midway and street fair; a barbecue dinner; a street parade headed by three bands from Harper, Blackwell and Alva; trick bicycle riding; steam merry-go-rounds; acrobats and high diving into nets; trained animals; balloon ascensions and a parachute leap; and a log rolling contest. It was all topped off by a large fireworks display.

Among the scheduled speakers were Dennis Flynn (Territorial Delegate to Congress), Cassius Barnes (Territorial Governor), Temple Houston (son of Sam Houston and Woodward attorney), Ed McCabe (founder of Langston University and leader of the Black statehood movement), Dick T. Morgan (President of the Free Home League, and later a six-term U.S. Congressman). This is of special importance to my family, as Dick T. Morgan is my great grandfather.

One of the biggest issues in Oklahoma Territory in the 1890s was the amount that homesteaders were required to pay for their land. In the 1889 Land Run, if a settler claimed land, made improvements and occupied the land for five years, the land was free. Beginning in the 1892 and 1893 Land Runs, the settler had to take all those steps, but was required to pay from $200 to $400 before a land patent (or deed) was issued.

As a result of this perceived unfairness of this additional payment, the Free Home League was established in Perry, Oklahoma, in 1895. The sole purpose of the League was to lobby Congress to waive the additional payment. The League thought the additional payment was contrary to the spirit and intent of the homestead law, the whole theory upon which it was based being that the settler paid for his lands by occupancy and cultivation, and the government was reimbursed by having its vacant and unproductive territory filled with a wealth-creating, revenue-producing population.

The most notable proponent in favor of the Free Homes Act was Dennis Flynn, a Republican, who was the Territorial Delegate to Congress (non-voting) for eight of the ten years from 1892 to 2002. Initially laughed out of the committee hearings in 1895, the Free Home League lobbied and got the endorsement of both major political parties (and the Populists) in 1896.

Some Free Home momentum was lost over the next couple years when Oklahoma elected a Populist delegate to Congress, but this was regained in 1898 when Flynn was sent back to Congress and my great grandfather Dick T. Morgan took over as President of the Free Home League.

At its height, the League was reported to have consisted of 900 local leagues (over the prairie and Rocky Mountain states) and 25,000 members. The last meeting of the Free Home League was held in February 1900. Delegate Flynn was one of the attendees and speakers at the convention.

My great-grandfather addressed the convention as its last president. His final address to the convention was copied and sent to every member of Congress. It was also printed in its entirety in the Guthrie newspaper the next day. The theme of the Convention: "Justice is our Battle Cry." Within a week after his speech was sent to Congress, he received 35 letters from Congressmen who promised to support the legislation. To garner additional support, the final bill was amended to include lands outside of Oklahoma.

Thanks to the historic efforts of Flynn over an eight-year period, both houses of Congress approved the bill without a dissenting word spoken or a dissenting vote cast. President McKinley signed the bill into law on Thursday, May 17, with Flynn and his 7-year-old son present at the White House. Then the celebrations began. Flynn was praised by Republican and Democratic newspapers alike. Many newspapers suggested that the day of the Presidential signing should be made a legal holiday in the territory. There was a movement throughout the territory to purchase a "free home" for Flynn, Thankfully the offer was refused by Flynn himself. Newspapers advertisements were based on the passage of the act, many of these ads included random photos of Flynn.

In addition to the biggest celebration in Alva (mentioned above), territorial newspapers reported on many other celebrations in large and small towns.

Two nights after the bill was signed into law, cannons were fired in Perry. In Enid, hats were thrown into a bonfire. In Cushing, one brave soul agreed to have himself tied to a rope and dragged across the town lake with a friend on his shoulder, which took place in front of 600 people and the town band. The day of celebration in El Reno, which was advertised as the "greatest doings ever held there," was spent in speechmaking, eating, drinking and "being merry."

The small town of Ripley in Payne County reported the big bonfires on Main Street "kept the heavens aglow until midnight." There were cannons, anvils, shotguns, old muskets, tin pans – "any old thing that would cause a racket was resurrected." Old Glory floated in the post office door with a placard bearing the inscription "Free Homes." There was one sound, "Hurrah for Dennis Flynn." Guthrie reported on the tolling of bells and the firing of cannons.

In Augusta (then in Woods County; now in Alfalfa County): people were invited to come out and "tear big holes in the air." Aside from speaking, singing, music, horse racing, a baseball game was scheduled between two undefeated baseball teams, one from Augusta and the other being the Northwestern Normal ball team from Alva.

Glencoe in Payne County hosted a three-county celebration. It was reported in the Chandler newspaper that one of its residents, Jerre Johnson, "went crazy" when he heard the law passed. That paper reported that the Free Homes Act would double the valuation of Lincoln County in one year.

The Medford Patriot printed an edition of its paper in red, which could be filed away as a souvenir of Flynn's achievement. A great barbecue was held on June 6 near Jennings in Pawnee County. Langston celebrated the Free Homes Act as part of its Decoration Day exercises at Great Hope Cemetery. Newkirk held a picnic at Meker Grove. Braman in Kay County had a large crowd, including a band from Blackwell.

Dennis Flynn was further honored in the Guthrie newspaper with a "Free Home" poem, along with the statement that in Logan County, in the first week after the act, 100 homesteaders filed for patent applications and were saved $60,000.

Dennis Flynn was easily re-elected to one more term to Congress as territorial delegate, but later lost a U.S. Senate race after statehood. He will forever be remembered as the hero of the Free Homes Act.

My great-grandfather would continue his legal representation of homesteaders. He represented homesteaders for three of the larger land openings. He published several editions of "Morgan's Manual of the U.S. Homestead and Townsite Laws," which became the leading authority on land laws in Oklahoma. He was appointed by Teddy Roosevelt as Register of the U.S. Land Office in Woodward, and was elected to Congress for six terms before his death in 1920. While in Congress (as a Republican), he wrote a book on Land Credits for the American Farmer, gave the first speech in the House in support of the Federal Trade Commission, and introduced legislation creating government backed loans for veterans.

The homestead is ours; hurrah!

An empire is shouting, hurrah!

Who is left doubting? hurrah

Bright is the coming day,

Dark clouds have rolled away,

All the world wonders, hurrah!

‘Till they have understood

For something surprising, hurrah!

A bright star will royally

Mount to our galaxy;