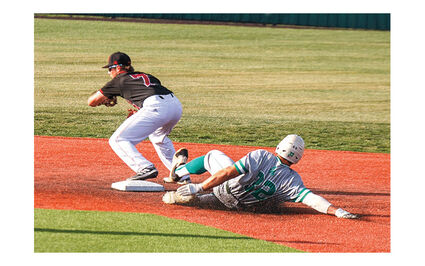 Northwestern's Thomas Beiswanger (7) tags out University of Arkansas-Monticello's Jordan Johnson (32) at second base.

Yugo Hamakawa and Daschal Johnson led the Red and Black offense, both finishing with two hits on the evening along with 2-RBI both leading the team. Blake Hoffman and Jake White each had one hit. Grant French had the last Ranger hit and RBI with a solo home run. Johnson and Hamakawa each had home runs as well for three in total for the Rangers. Hamakawa led the team with two runs scored, with Johnson, French, and White each scoring once.

The Weevils jumped out fast, having their first five batters reach base safely with four straight singles knocking in two runs to start the game. The Rangers got their first out with a sacrifice fly to left field as the Weevils extended their lead to 3-0 in the away half of the first inning.

The Rangers responded fast, though, with a single from Hamakawa followed by a two-run home run for Johnson to bring the Rangers within one at 3-2.

Creedon threw a scoreless inning for the Rangers in the top of the 2nd inning before the Rangers offense helped the Red and Black take their first lead of the game at 4-3. White singled into a left field, setting up Northwestern's second 2-run home run in as many innings this time from Hamakawa.

The Weevils had the answer, though in the third inning following a leadoff walk. The Weevils drove in the run on a Shepherd home run to left-center field for a 2-run home run to go back in front at 5-4. Monticello went back-to-back with a solo home run this time to increase their lead to 6-4 through the top half of the third.

The Red and Black drew closer with a solo home run to left field by Grant French, bringing the Rangers deficit to 6-5.

The visitors grabbed two runs in the fourth through following a walk, and then an error set up back-to-back RBI singles to center field to push Monticello's lead to 8-5. In the fifth inning, the Weevils added more following a leadoff double; Thompson singled to drive in the run for a 9-5 Monticello lead. 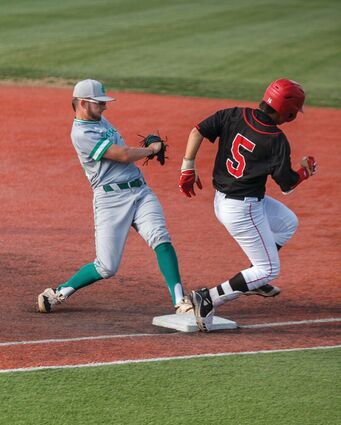 University of Arkansas-Monticello's Mason Philley tries to tag out Northwestern's Yugoslav Hamakawa (5) at first base.

After a scoreless bottom half of the inning, Arkansas Monticello scored two more runs after a one-out hit-by-pitch Gaela followed with a 2-run home run. The Rangers and Weevils traded scoreless innings in the seventh as through seven innings; the Weevils led 11-5.

Arkansas Monticello put their first three hitters on in the 8th to load the bases before a double play from Paige throwing to White to Hoffman to save a run. The following two batters reached base safely before a 2RBI single to left field, bringing the score to 13-5. The Weevils scored the game's final three runs with a 3-run home run to center field to take a 16-5 lead.

The Rangers got a base runner in the ninth, but Monticello held the Red and Black scoreless for the sixth straight inning to finish off the 16-5 win over the Rangers.

The Red and Black finish the season with a 26-15 record on the year and a 21-13 conference record. The 21 wins were the most since joining the Great American Conference, with the 26 wins the most since 2012.