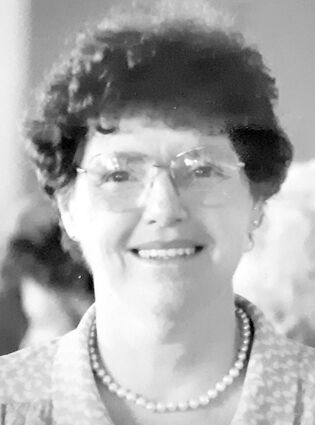 Marjory Lou Harrington was born Marjory Lou Mitchell in Lincoln, Kansas, on November 18, 1929, the daughter of Dr. Charles Edward Mitchell and Alta Eleanor Crawford Mitchell. She passed from this life on May 14, 2021, in Wichita, Kansas.

She spent her early childhood in Lincoln, Kansas, with the family later moving to Kiowa, Kansas. Her older brother, Charles Edward Jr., was seven years her senior so she shared many more activities with her younger brother, William "Bill." Marjory's Mother, Alta, suffered from rheumatic heart disease, which sapped her strength and took her life when Marjory was a young teen. Her father, Dr. Charles Sr., later married Elizabeth "Beth" Berger Crawford who brought with her two young children, Larry and Rosalee "Mickey," to join the family.

Marjory graduated from Kiowa High School in 1947. On June 2, 1947, she was married to James Wesley Harrington at Kiowa United Methodist Church. They lived in Alva, Oklahoma, until the spring of 1950, when they moved to the family farm six miles north of Alva. At that time they had two children, James Edward and Patricia Lou. Soon to follow were David William and Dwight Richard. Marjory and James lived on the farm until James' death in 1982. Marjory then moved to Wichita to be nearer to family. There she attended Wichita Area Technical College to learn computer skills and worked to the age of 70 in the billing department of Via Christi Hospital. She enjoyed retirement in her west Wichita home until her death.

Viewing for Marjory will be Sunday from 2 p.m. until 5 p.m. at the funeral home. There will be a private family graveside service for Marjory at Fairview Cemetery, rural Woods County, Oklahoma. Arrangements are by Lanman Funeral Home, Inc. of Kiowa, Kansas. Online condolences may be made at http://www.lanmanmemorials.com.

Memorials may be given to Harry Hynes Hospice through the funeral home.