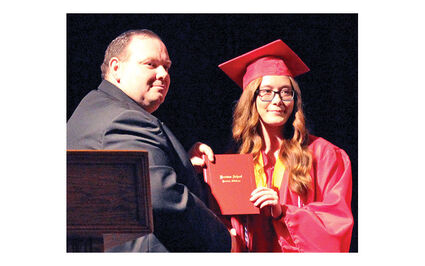 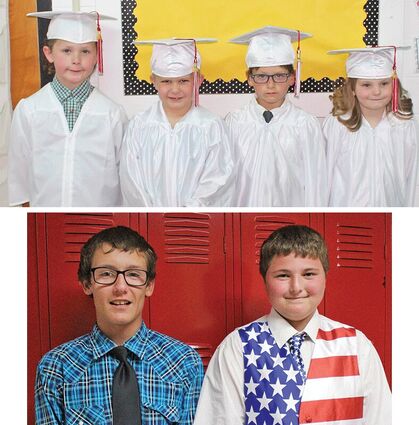 The evening began with the Baccalaureate service, which was officiated by Pastor Mark Kinkel of the Freedom Christian Church. He led the audience in prayer, worship, and gave a message. He presented a Bible to the graduating senior, Madison Rhodes. His message included verses from Proverbs about knowledge. He challenged the senior and the eighth graders to rely on their faith and knowledge.

Graduation began shortly after Baccalaureate. Rhodes gave the invocation. Superintendent Bryant Weber presented the kindergarten class with their individual certificates. Principal Michelle Shelite presented Rhodes with the Salutatorian award and Rhodes read her address. She thanked her schoolteachers and parents for her success. Shelite then read the plans that included that Rhodes would forgo college and go straight to work in the medical field of phlebotomy.

Next was the graduation power point and flower ceremony. Weber presented the eighth grade class with their diplomas; then the senior student with her diploma. Andy Townsend, an eighth grade student, gave the benediction. A reception followed in the cafeteria.