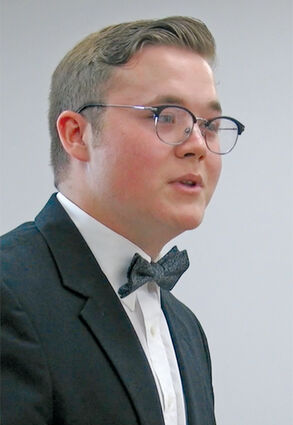 How are Alva Incentive Scholarships distributed? That was the main focus of questions asked by members of the Alva City Council during the Monday, May 17, meeting. Representatives of Northwestern Oklahoma State University attended the meeting to present the spring scholarship bill and give a brief update on NWOSU.

Councilmember Daniel Winters said he's had some people asking if students who receive the Alva Incentive Scholarship attend classes on the Alva campus. Bird verified that they do.

Councilmember Taylor Dowling asked about the selection process for recipients. He said he knew those attending Ranger Preview receive a $600 scholarship; he received one himself. "Is there any other type of academic process you go through in selecting these candidates?" he asked.

"Ranger Preview is one of our recruiting events, and if students register and come to that, when they're able to come to that (Covid caused it to be virtual), and then if they enroll and come to campus they receive that money," said Cunningham. "There's a lot of other selection criteria for students who might be receiving different participation awards or athletic or music or president's leadership class for example. It's just kind of incorporated into our overall scholarship program."

"So it's merit-based and no committee selects individuals or anything like that?" asked Dowling. Cunningham agreed it was merit-based. She said, "President's Leadership Class is very selective. Ranger Preview is more to get them on campus."

"It's a leverage tool to get students to come in. It's what all our scholarships are for, not only to help them but to help get them here," said Bird.

Dowling asked, "Have you guys seen an increase in size of freshmen classes since the implementation of that program?"

"We have," said Cunningham. "It's been a little bit of an up and down model. You just never know. It's so dependent on what's happening in the high schools, and what the size of their classes are."

Councilmember Randy Stelling asked, "Is it freshman specific or is there something for retention?"

Bird said the scholarship can go to transfer students whenever they come to the Alva campus for their first year. Cunningham said there's no retention part in the incentive scholarship.

"That's where the foundation steps in," Bird added. "Once they get them on campus, we step in the second, third and fourth year and try to keep them here and keep them solvent to finish their degree. So when we talk to donors, we try to get them to invest in continuing students, not necessarily freshmen. That's kind of where we put the focus."

"There is a specific award that is additional for Alva High graduates," said Cunningham. "That was not initially in the program, but after several years we brought that forward as an idea because we felt like those students, their parents and probably grandparents and so on were certainly ones that were paying that extra sales tax and we felt that was justified to have an extra amount go to those students."

Bird said usually at least one council member has a son or daughter on the list, but he didn't see one this time. "They're too young," Cunningham said with a smile.

"Thank you to the council, thank you to the citizens of Alva," said Dr. Cunningham as she spoke to the council. "This sales tax incentive, Alva Incentive Award, is very much a difference-maker for the university. It's envied by a lot of other communities in Oklahoma. None of them have figured out how to do it, although we do get calls periodically on the process that we went through.

"I think at this time in January when we came, we had finished the fall semester. We're pretty happy about being able to finish the fall semester. We even had in-person classes after Thanksgiving break which very few of the universities in the state were able to do, but we talked to our students and they definitely requested in-person classes. We were able to comply with that.

"You know Covid, after the start of the spring semester, seemed to tail off for us. Our highest numbers in that week or two before Thanksgiving, I think at the highest we had maybe around 40 employees and students spread among all of our campuses, not just the Alva one. And we are continuing to post that. I think we had one maybe at the last report I looked at maybe last week.

"We were just thrilled to have a relatively normal spring semester. Last week we had graduation, and I don't think we've had as big a crowd at graduation as we've had for a long, long time. I think people were ready to get out and used that reason to come and support their student. We just about ran out of parking at the football field, and that's a pretty big parking lot.

"We find that our students speak the best for us, and I asked Austin Rankin. He is a freshman, one of our best and brightest, no pressure, from Waynoka, Oklahoma, and he's just going to talk a little bit about what our scholarship, probably several scholarships meant to him in coming to Northwestern."

Dressed in a suit, dress shirt and bow tie, Rankin said, "I'm currently enrolled at Northwestern Oklahoma State University. I guess technically now I'm a sophomore which is weird feeling, but as President Cunningham mentioned, this coming semester we're not going to have masks so it's going to be weird going into a college that I've attended for a year now and be able to actually smell it and breathe the air in college and recognize the other halves of faces. I'm going to meet a whole new class I haven't met before just because I'm like 'Wow, there's more than your forehead now.'

"As I mentioned, I'm currently enrolled at Northwestern Oklahoma State. My degree is in political science with a minor in history, and I plan on going to law school after college, maybe OU or Tulsa. I may just throw out an odd ball and run for Harvard, who knows? But my plan is to practice as a defense attorney and come back to northwestern Oklahoma, specifically Alva if at all possible.

"But that's not what I'm here to tell you about. What I'm here to tell you about is my experience at Northwestern, and specifically the financial aid that I've received. So I've received, as was mentioned, scholarships for PLC, president's leadership class. I've been selected as president's leadership class sophomore advisor for the upcoming year, as well as I participated in the band. I play tuba in case you were curious, and I received a scholarship for that as well. (He offered to bring in his sousaphone from his car to play a tune.)

"Essentially when I was talking to some of the incoming freshmen this year, I was speaking about what Northwestern is about. That was one of the main questions, 'What specifically is president's leadership class about? What is Northwestern all about?'

"And essentially what I like to think of is Northwestern is either a place you can go to school at or it's a place that can be your home. Through the financial support that the City of Alva has given Northwestern as well as Northwestern's own, I have been able to go to college debt-free, loan-free, and have my first year of college completely paid for, which is something most college students nowadays can't say.

"Coming from a small town like Waynoka, I was not nervous at all because I knew that the small town sort of feel was still here alive and well in Alva. And it's been an absolutely great experience. Faculty and administration have been very, very welcoming, and it's ultimately become the place I know I'll spend the remaining three years of my college education here. And essentially it's just been a fantastic time.

"If I can get as many people to come to Northwestern I will because it's easy on the pocketbook as well as just a fantastic place for education. So I would like to thank you guys. Thank you for your support of Northwestern. I thank the Alva community for their support as well. And I really encourage you to continue supporting Northwestern Oklahoma State University and continue supporting the city of Alva."

Dr. Cunningham added one final comment, "I will say this has been a tough recruiting year because our Ranger Preview could not be an in-person event. We had to do that virtual and it's just not quite the same feel. Our recruiters are working hard, but it has been a little different. We're full steam ahead for the summer working on getting as many students here as we possibly can."

The Alva Incentive Scholarships are paid from an Alva sales tax of one-half percent. Alva voters approved a one percent sales tax designated for economic development with half going to the scholarships and the other half to the Alva Recreation Complex. The Alva Economic Development Authority (AEDA), made up of the city council members, oversees disbursement of the money.

During the AEDA meeting later in the evening, the trustees approved payment of the NWOSU spring semester scholarship bill by a 5-1 vote with Brooks voting no. Councilmembers Connor Martin and Mary Hamilton were absent.

In the Alva Utility Authority (AUA) meeting, held between the city council and AEDA meetings, trustees approved minutes of the April 19 meeting, claims of $113,071.95 and payroll expenses of $57,050.30.

A video of the city council, AEDA and AUA meetings may be seen at http://www.AlvaReviewCourier.com.