• Remembering those who died for our freedom 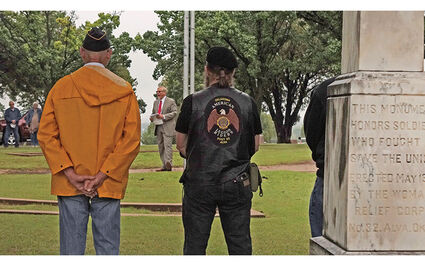 Members of American Legion Post 92 listen as Dr. Carl Newton speaks at the Alva Municipal Cemetery on Memorial Day. At right is a monument erected May 1913 by the Womne's Relief Corps No. 32 of Alva honoring "soldiers who fought to save the Union." The base reads "May the flag that you fought for in peace forever wave."

A number of people braved the occasional light rain to attend the Memorial Day Service at the Alva Municipal Cemetery Monday morning. Small flags waved on veterans' graves as everyone gathered around the flagpole at the west entrance. Cemetery Board Chair Lenny Reed greeted guests. His welcome was punctuated by the distant blare of a train at a crossing to the north.

Scout Troop 392 presented the colors. The U.S. stars and stripes as well as a black POW flag were attached to ropes that lifted them to the top of flagpole. Scouts stood at attention and saluted the flag as others saluted or placed hands on their hearts. Scout Keegan Logsdon raised his bugle to play Taps.

Memorial Day began as Decoration Day, an idea from Gen. John Logan as a way to honor fallen soldiers of the Civil War. It wasn't until after World War I that Memorial Day was expanded to honor all veterans who died in any American war. In 1971 Decoration Day became officially known as Memorial Day, and Congress passed an act declaring it a national holiday. It is celebrated on the last Monday of May.

Following the flag ceremony, Reed introduced guest speaker Dr. Carl Newton who was born in Waynoka and resides in Cherokee. He is the state representative for this area of northwest Oklahoma.

After acknowledging those present, Newton said, "Memorial Day is a time to remember those who have gone on ahead of us, who have given up their lives that we can be in a free place today. I think it's very fitting that we look today at how our lives would have been had those heroes never been able to do what they needed to do.

"How many of you have ever seen the movie "It's a Wonderful Life"? Remember the story about George Bailey whose desires were to go off and see the world and leave what he thought of as his small town? All of his dreams came crashing down because he needed to take the responsibility to take care of his family, his community and those around him. It just seemed like every time he tried to get away, he was pushed back.

"He kept on fighting the good fight. When finally it seemed he was getting ahead, all of a sudden it came crashing down with a major catastrophe. He was to the point of suicide. He was to that point and wanted to give it all up. And then the guardian angel Clarence came in and gave him the opportunity to see what the world would have been if he had never been born."

Continuing that theme, Newton said, "What I'd like you to think about, what would our world be, our nation be if it had not been for these fallen heroes?" He gave three examples of wars that affected our futures.

First was the Revolutionary War. "If we did not have the fallen heroes who had the courage to step up what would our world be like?" asked Newton. "First of all, we'd still be under English rule. Our success would depend on our bloodline. Are we related to the king? Are we a knight? It would be based on that.

"We'd also have taxation without representation. That's why they mainly fought (the war), because they were passing all the taxes on us. We weren't able to say anything.

"But because of them we are under our own government. We have our own nation and true freedom. We have the ability to do what we want to do. We control our future. Our own citizenry decides how we worship and what kind of government we have. As we established at that time, we are a government of the people, for the people and by the people."

World War I and II

Next he focused on World War I and II. "Germany wanted to become a superpower. They wanted to control the whole world. They were mainly focused on Europe at the time, to have a totalitarian government. Again they wanted to take away our freedom," Newton said.

"They hadn't really attacked the United States at that time, but we did get involved. Without us getting involved, you'd have a totalitarian government over all of Europe. You would have no personal freedom over there, and they had no respect for personal lives.

"More than likely they would have invaded our own land if it had not been for us stopping it over there. I think that would be true for World War I and World War II. They would be in our country right now.

"Why did we get involved in World War I? We stayed neutral at first. We were shipping some things, our carriers were shipping things to Britain, and so Germany attacked them. The final straw was when they sank a normal civilian ship. We respect human life. We respect and care about people, and that's why we got involved.

"We kept the world a freer place. We proved that we are not someone you can run over and our freedom means something to us. We showed our true concern for all people."

Focusing on World War II, Newton said, "We had Hitler, a true dictator. Truly you were under his rule. We would have been slaves here in America if Hitler had got his way. We'd have been under government control. No one would own businesses or their land. They were trying to genocide the nation of Israel, the Jews.

"Due to the fact that we had the fallen heroes, these people that were willing to sacrifice their lives, step out on the front lines and give their lives"

He said during the wars the U.S. "showed the rest of the world what freedom can do – our ingenuity, our technological advances, our medical advances and also our weapon advances."

Newton said, "Freedom is not free. It's something that you have to work at every day and all the time. I think Ronald Reagan said it very well, 'Freedom is never more than one generation away from extinction. We didn't pass it to our children in the bloodstream. It must be fought for, protected and handed on for them to do the same, or one day we will spend our sunset years telling our children and our children's children what it once was like in the United States where men were free.'"

Although it wasn't part of his prepared speech, Newton talked about an internet posting he had seen that morning. "I saw something this morning that really hit home with me today. It was talking about John Smith Manchester. A friend of mine posted it today. (Manchester) died in a rice paddy in Vietnam. He was 22 years old. He never had a family, never had children, never saw what it was like to have a man on the moon, never knew Ronald Reagan except as an actor, never had a Twitter account, never had a Facebook, didn't know what Apple was, didn't know what Google was, didn't know all that.

"All those things he missed out on so that you and I could stand here today in freedom. We can stand here and have the right to have differences of opinion, by the way at the capital I've found out that not everybody agrees with me. We all have our opinions and we have the freedom to voice those. 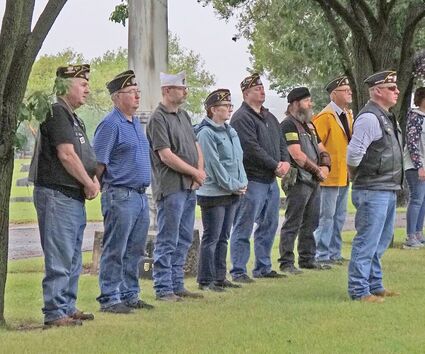 "This war became more real to me this year as we dedicated the Vietnam memorial at the historical center that in the Vietnam War a lot of our heroes came back and weren't respected and weren't appreciated. Shame on us! But to those, I want to say "Welcome home and thank you. Your service is greatly appreciated. It made a difference."

He ended with an admonition to those present, "It's up to the next generation to protect our freedom, to keep ourselves strong and be good caretakers of the freedom we have. Do not take them lightly. Let us never take that liberty for granted."

Following the service, everyone was invited to walk down the hill to the pavilion where Arden and Nicki Chaffee provided donuts and drinks.