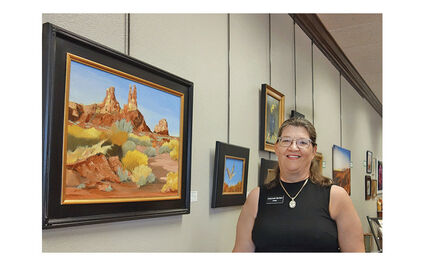 Deborah Burian enjoys painting the natural beauty around us, particularly in the parks and wildlife preserves. Her work is on display during June at Graceful Arts Gallery in Alva.

As a child growing up in very rural Ohio, Deborah Burian had no access to television. "We had endless paper and pencils so I and all of my brothers and sisters drew all the time," she says.

Burian continued her drawing during high school. Attending university classes, she met her husband. "We got married, and life took over as it does," Burian says. "I always continued to draw and sketch in journals and sketchbooks with my hiking outdoors."

One day while sitting on the rim of a trail in the Grand Canyon and sketching, Burian watched the sky turn "an absolute lavender color. At that moment, I knew I had to start adding pigment, color, to my sketches." She picked up a watercolor kit because it was light, easy to carry and didn't need very little water as she backpacked and sketched.

After some time painting on her own, Burian went to the Pre de West at the National Cowboy and Western Heritage Museum in Oklahoma City. She started to study with "a very, very good watercolor artists there, Joseph Bowler. That was the beginning, and I've been painting in watercolor very seriously for about 15 years. I've been represented by galleries about ten of those years."

When Oklahoma and the U.S. were shut down by Covid, Burian decided to try some new mediums including oils. "I just fell in love with the medium," she said. "The depth of color, the textures, the other things that you can get in oil that watercolor, as much as I love it, just doesn't produce.

"I expect to continue to paint in oil because my primary interest is capturing the landscape and celebrating public lands. Many people don't realize how much of the land around us is publicly owned and thus belongs to all of us. Those lands so desperately need to be protected."

As a featured artist at Graceful Arts Gallery, Burian traveled to northwest Oklahoma to be available for the Alva First Friday Art Walk. She brought along her camper and spent the night at the Great Salt Plains in Alfalfa County.

"In my show here, you'll see I have a painting of a sandhill crane lifting off from the Great Salt Plains. The only reason the sandhill cranes are still here is because forward-thinking people created a refuge, really in an attempt to save the whooping crane, but it benefitted the sandhill cranes as well," she said. "So I'm particularly interested in those kinds of areas and areas where the land needs to be protected. It's no coincidence that they're also stunningly beautiful."

Burian says she intends to continue focusing her art on landscapes in the future and to continue to advocate for the protection of public lands.

Throughout June the Graceful Arts Gallery in Alva is featuring Burian's work in the Art on the Salt Fork exhibit. They will also continue to offer some of her work in their gift shop.

If you want to see more of Burian's art, check her website at http://www.DeborahBurian.com. You can also find her on Facebook at Deborah Burian Artist.