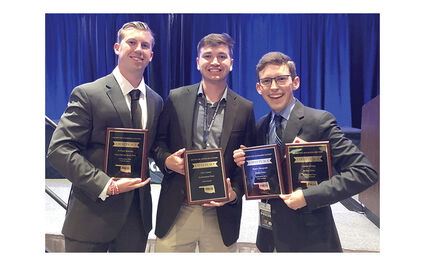 Awards from the OPA were presented in Oklahoma City June 11-12 during its annual convention. The campus newspaper as a whole won first place in news content and second place in three categories – layout and design, photography and sports coverage. Seven individual awards were presented to News staffers.

Three issues from the 2020 calendar year were submitted for the news content, layout and design, and sports coverage categories with six photographs – two each of news, sports and feature – in the photography package category.

"Strong local coverage, good solid writing, the best use of photography in the competition all combined to put this paper on top," according to the judge's comments provided for the news content category.

Judges in the layout and design category loved the newspaper's use of a "double-truck layout" each week in the middle of the newspaper and enjoyed the user-submitted reviews in the entertainment section.

Northwestern News editor-in-chief Jordan Green, Blackwell sophomore, earned a first-place award in feature photography for "October Sledding Fall," and a first place for column writing with three articles submitted for the category titled "The Scoop on a remarkable man," "Support local journalism," and "It's a hairy situation." Judges said it was an interesting commentary on a broad range of subjects.

Nick Dill, The Colony, Texas, junior, and Kevin Ford of Oslo, Norway, a May 2021 Northwestern graduate, earned first place in the in-depth category for "University recycling programs." Judges said this is an issue that expands well beyond the campus's walls and that the students did well in interviewing a wide range of individuals while keeping the story feeling localized.

Second place honors in in-depth reporting went to Leah Darnell of Haysville, Kansas, and Logan Meriwether of Waynoka, both May 2021 Northwestern graduates, for "Covid-19's impact on education."

David Thornton of Slidell, Louisiana, a May 2021 Northwestern graduate who served as the newspaper's photographer, earned a second-place award for a sports story titled "We have a chance: Coaches at Northwestern are keeping athletes motivated and conditioned." Thornton also earned a third-place award in the news photography category for "Bob Ross painting event."

Third place honors in column writing went to McKayla Holson of Waynoka, a December 2020 Northwestern graduate whose three articles submitted for the category included "What about those we don't keep?" "Lucky me," and "Saying Goodbye and reminiscing."

"I am honored and humbled by the awards the Northwestern News earned during the Oklahoma Press Association's Better Newspaper Contest," Green said. "The News is home to Northwestern's best and brightest, a group of students who passionately tell this university's stories. We don't put out a newspaper to win awards, but earning them proves that we're serving our readers and our community well. We always have room to improve, and we will continue to tell the stories that matter at Northwestern."

At the end of the spring semester, the Northwestern News also was named by the OCMA as the Best Overall Newspaper in its division.

The categories, placings and students winning the awards are as follows: 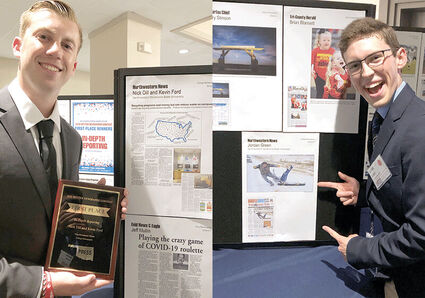 "There aren't many times in life when we are surrounded by talented, dedicated, hard-working, caring, compassionate, considerate people – but at the Northwestern News, I am," Green said. "This team is comprised of some of the best people I've ever met. They love Northwestern, and more importantly, they love serving their peers and providing them with the information they need to succeed."

Northwestern News adviser Dr. Kaylene Armstrong, associate professor of mass communication, is equally proud of the work and commitment the students give to the newspaper.

"Everything that goes into making a paper every week – from writing and editing to photography, layout and design – takes so much more time than most people realize," Armstrong said. "They have all worked hard, and the honors show it. I am so proud to be able to work with these talented and dedicated students."

Articles from the Northwestern News can be found at https://northwesternnews.rangerpulse.com.