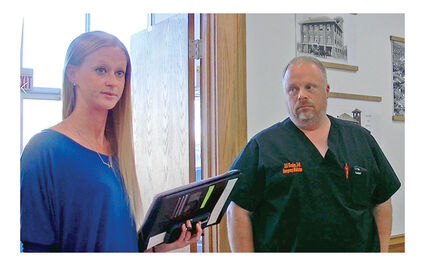 Alva EMS Director Julie Dennis (left) introduces Bill Worden, D.O., who is medical director of Heartland Medical Direction. He spoke to the Alva City Council Monday before they approved a contract with his firm.

A contract with a medical company was approved during the regular Monday, June 21, meeting. Heartland Medical Direction provides medical oversight for EMS agencies.

Alva EMS Director Julie Dennis introduced Bill Worden DO, who is the medical director of Heartland Medical Direction. He talked about the services provided.

"EMS agencies are required by state statute to have a licensed physician as their medical doctor to authorize the procedures and things that they perform," said Worden. "One thing that I do probably differ from most every medical director in the state is that I am actively involved. Most medical directors, I think as Julie can attest to, they sign a paper for you once a year, once a quarter, and then they never see them. Probably couldn't pick them out of a police lineup if they had to.

"One of the things that I do, I do site visits. I run calls with crews. We do the quality assurance activities. My company, Heartland Medical Direction, we employ four paramedics that are involved in training through a state grant which is called OERSSIRF which is an emergency response stabilization grant. For the last three years my company's been awarded that grant and so we get money that helps us come out to the rural areas to provide training.

"We have a simulation trailer, and so in addition to didactic training we offer hands-on training. So this trailer is outfitted exactly like an ambulance. It has every piece of equipment the back of an ambulance has with a fully functional mannequin so that they can practice procedures and things that they normally wouldn't get to do.

"That's one of the things our company strives to do, to try to bring the training locally to the agencies we support. Right now we have 21 EMS agencies and about 30 rural EMR agencies that we support across 24 counties in Oklahoma. Myself and the four paramedics that work for me are on the road basically Monday through Friday visiting these places. I would anticipate someone would be here probably once a month. If not, every other month.

"We also do online training. We have a system which is called Moodle which is used by a lot of universities where all their (Alva's) medics can enroll online and then watch our prepackaged continuing education, stuff that we do monthly. We also offer training for the fire departments as well as CLEET training for law enforcement officers. A lot of the stuff that we do has a CLEET approval number so if they attend the training with the EMS, they get the same credit."

The basic cost for the service is $100 per month. Councilmember Daniel Winters asked if there would be an additional charge if the city wanted training provided to police and fire departments.

Worden said, "The police no because there's not much training involved there. They just piggyback on what we do. The fire department really depends on what they would want to do. I know we briefly talked about it in the EMRA (emergency medical response agency) so we'd have to visit that a little bit."

Worden said for an additional charge, his company offers narcotics coverage for any EMS responders who do not have that qualification. "We utilize a non-paper based system. It's an iPhone app that we pay for and then we pass along that charge to the agencies so that would be the only other charge if we moved toward narcotics." He added that his company is completely paperless.

Pointing out that Alva EMS will have extra money budgeted from the 522 EMS District taxes, Councilmember Taylor Dowling asked if it would help the Alva EMS to have that additional coverage, and Dennis said it would. Narcotics coverage would cost an additional $50 per month.

Worden said if a patient being transported had a narcotic drip for pain, the ambulance personnel would be able to monitor it with the extra coverage. With only basic $100 coverage, the patient could not have the drip and might suffer pain during transport.

City Business Manager Angelica Brady said the contract she had been provided only had the basic $100 per month charge. Worden said it could be amended to $150 to provide the extra coverage.

According to Dennis, the Alva EMS has one paramedic who is "narcotic capable" and works 48 hours per week. The extra coverage would allow all paramedics to monitor narcotics.

Councilmember Brandon Sherman made the motion to approve the contract, amending Section 8 to $150 per month to offer narcotic coverage. The motion carried with a unanimous vote.