A celebration of Dalton Black's life on the 4th of July, his favorite holiday 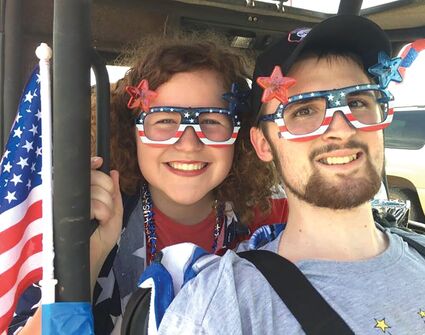 Self-proclaimed "besties," the late Dalton Black and Bayli Hyde are shown together at Hardtner's 4th of July Parade in 2017 as they were so many years while raising money for Muscular Dystrophy. A Celebration of Dalton's life is planned in Hardtner Sunday at his parents' home.

Dalton Black may have had muscular dystrophy (MD) since he was a little boy, diagnosed at age 6, but people saw his winning smile and personality before they realized his disability. He succumbed to MD during the Covid-19 pandemic April 4, 2020, so his family couldn't hold the funeral or celebration of his life that Dalton so deserved because of the pandemic restrictions.

Now that crowd restrictions are lifted, how fitting that on Dalton's favorite holiday, the 4th of July, that his parents Jeff and Stacy Black of Hardtner plan a celebration of his life. They invite friends and family to drop by their home for a come and go on the 4th, this Sunday from around noon throughout the day for a bite to eat and lots of "Dalton stuff." A group of the Black's friends gathered to help his parents put together pictures and a video featuring Dalton. His mom Stacy said they'll play his favorite music which is "old country, basically Willie's Road House." She explained he enjoyed listening to that music in his grandparents' (Wes and Barb King) back yard. "He knew all the old singers," Stacy said after her dad and Dalton played a game of shouting out the name of artists.

"This would be what he wants," Stacy said of the celebration for their son. "Nothing formal – the most fitting thing to do. To have family here on the 4th last year really helped us out."

Stacy said, "Dalton's favorite part of the 4th of July was when Bayli Hyde, his friend since they were tiny, came to spend the day with him." Bayli's mom, Marci Hyde of Burlington, explained how the two became such good friends. "Twenty years this summer we vacationed in Colorado with Jeff and Stacy and their twins Dalton and Conner. We got the kids together, but the kids forged their own friendship."

One of Dalton's proudest moments was when he was Hardtner's 4th of July parade marshal and Bayli went down the parade route with him. Actually, the two rode in the parade together many years as they raised money for the FUSE MD Camp. Stacy said, "Dalton was passionate about the FUSE MD Camp that became a retreat for adults with MD. Attending camp was his ultimate favorite thing to do." Many years, Bayli organized the MDA Fill the Boot Campaign with the Burlington Fire Department and others raising thousands of dollars.

When asked to comment about Dalton for this article, Bayli told the Newsgram, "Dalton's friendship is one of the greatest gifts I've ever been given. My friendship with Dalton was very different than most. It was a friendship that came with an expiration date that came far too early. But, we made memories that will last a lifetime. Dalton was ridiculously smart and always had an answer for anything you would ask him. He was passionate about NASCAR and knew the ins and outs of racing. He was adventurous and could talk me into anything. This included making our moms help us break into the Hardtner pool when we were younger. One of my favorite 4th of July memories was walking right by his side when he was Parade Marshal. It was hard not to love Dalton. He made everyday better for the people around him. Dalton didn't have much of a filter on him and you usually always knew what he was thinking. Those comments always made for the biggest laughs and the best memories. I'm grateful everyday the Black family allowed me the honor of having him as my best friend."

Stacy said, "Dalton loved the fireworks and trying to find the Medallion (in Hardtner's 4th of July Medallion Hunt) but never did. We (she and the Hydes) found it for the first time last year. He was helping us I think."

His grandfather Wes King made sure this year Hardtner's Medallion Hunt is in honor of Dalton. In a separate article submitted by Hardtner native Meagan Henry see all the activities that are going on in Hardtner on the 4th of July. Many citizens are moving forward with traditional activities although the chamber of commerce voted to no longer sponsor the over 60 year celebration. This was due to many factors, mainly lack of help.

Anyone who knew Dalton was aware of his serious love for Dallas Cowboys Football and NASCAR. His mom laughed as she said, "He actually had a love/hate relationship with the Dallas Cowboys!" His parents took Dalton to many of their games and the car races. Stacy said he also got in to watching golf.

"He had a dry sense of humor. He would say things that would crack us up," his mom said lovingly.

Local Bill Cundiff told the Newsgram, "Dalton loved me telling him the old stories about Hardtner. He loved watching them cut wheat. He just loved life. And he liked being razzed a little bit!"

Kiowa man Stoney Reif ran the O.K. Grain elevator in Hardtner many years. He said, "Dalton loved to come down here during harvest. He would sit out in the sun and watch the trucks. Then I built him a ramp so he could wheel right in the office. Stacy and Jeff would bring him down in the van. He would come by the co-op to visit nearly every day between 4:30 and 5 o'clock. When I asked what he was doing, he would always say `not much'. He would always kinda keep those girls (working at the elevator) lined out! He got to where he could read the info on there and tell them what it said. It gave him something to do and he spent a lot of time over there. He was always my favorite visitor. He never complained. Dalton sure loved to watch the wheat trucks."

Dalton's uncle Jay Black is an educator at Shawnee Mission in the northwest Kansas City area. He teaches social studies and is in his 29th year of coaching. He is currently a wide receivers coach. When asked about Dalton he told the Newsgram, "In teaching and coaching, I work with completely healthy kids everyday that make excuses about why they cannot do something and I think of Dalton. He always took on a new day with a positive attitude and that took a lot of courage with his sickness. The 4th of July has always been our family's favorite holiday and Dalton loved that day. He could get into his golf cart and make the rounds of Hardtner and check out all the 4th's activities with the biggest smile."