'Economic development is never done by one person' 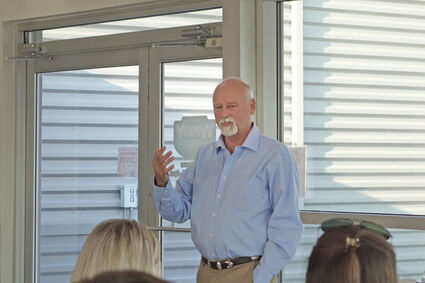 By the time the Alva Chamber Community Coffee concluded Friday morning, the crowd had grown to exceed the generous number of chairs available. The event was held at Windy Ford, formerly owned by the Washburns. An array of fruit, pastries, coffee and water was set out for everyone to enjoy. Comfortable padded chairs were arranged in the west end of the large showroom.

Windy Ford owner Tony Booth introduced himself. "I'm in a lot of small communities and Alva has been great for us. It's been very open-armed. We've met a lot of good friends here in Alva, and we really enjoy it," he said.

"One of the stories I'd like to share with you this morning is the fun that we're having in Alva. The community support has just been incredible. When we started here Sept. 15 through the Covid deal and we bought out the Washburns, we started here with seven employees. Today we're over 22 employees and we're doing a new addition that we're going to be starting on. We're going to be adding more employees and more future things."

Booth said he's enjoyed working with the city and the community. He concluded, "We're just blessed to be here, and we look forward to the next step and the next adventure in Alva for us."

Neal Williams, executive director of the Woods County Economic Development Committee, was scheduled to give an update on the Alva Arena project. But he first talked about community participation.

"Economic development is never done by one person ... ever. I don't care where you're at, that is not who does it. You guys do it. You may not realize you do it, but you do it," he said.

"I'm grateful that Kelly (Parker) is here as the mayor. Some council members are here. If it wasn't for you guys, we couldn't do economic development. You guys set the stage when we bring people in."

Gesturing toward Booth, Williams continued, "Fortunately you've come in. You've enjoyed it, but not without obstacles that we have to overcome. But the really good thing is our people are willing to work and overcome things. And that's kind of the best thing that's happened since I've got in the job.

"We've looked at things. How do we make sure that we're ready for economic development" How do we become a community or a county that wants economic development? That's the first step. We've been working on that hard – council people and Kelly and Angelica (Brady, city business manager) has been wonderful.

"We've got some companies right now that are looking. As we continue to improve our business attitude here in Alva and Woods County, I think it will be like dominoes down the road, hopefully."

Turning his focus to the arena and event center project, Williams said, "That's a game changer for our whole area ... huge amount of money. We're lucky that we have an organization that cares about this area, and they basically fund the thing. Now we've got to have a way to maintain and operate it. They've kind of got that figured out somewhat, and hopefully it's enough."

He asked the audience to start naming off events that could be held "in a facility like this." Answers came: concerts, trade shows, rodeos, dog shows. After a pause, someone quipped, "It's like Family Feud."

When the laughter died down, Williams continued, "We can have all that stuff here which we have no venue for right now."

He said years ago when he was the Alva Chamber manager, it was hoped to hold a state chamber meeting in Alva. But there was nowhere to hold such a large gathering for three days.

Continuing, Williams said, "I know everybody gets to wondering, 'Well, golly, we've been working on that for six years.' Guess what, when you deal with the government on any kind of program, it takes a lot of time.

"For example, we thought we had everything done. I mean years. 'Yep, you've got everything. We've got everything ready to go.' Then 'Oh, dad-gum, sorry about this, but we need this.' "What, we did one." 'Yeah, but it wasn't as full as we want it so we're going to ask for this.' So guess what, you spend more money and get another report. So that's the kind of stuff that we've been dealing with."

(As part of that additional site review to secure financing through USDA RD, the Alva City Council will address a survey form at their meeting Monday night. The form was filled out by the Alva Planning Commission.)

"Hopefully, and I'm not going to say it's a definite deal, sometime in the next several months we'll be ready," said Williams. They'll have everything they need, and they'll say 'okay, go for it.'

Williams asked for any questions from the audience. Booth said, "Last I heard the money's still short because of the price of lumber and labor and getting materials. That was about 15 percent off your budget."

"No that's been taken care of. Share had a meeting and that issue's kind of been resolved," said Williams. "The last thing we heard was the bid would only last two weeks because of the way things are in the world right now. I'm hoping, because they told us that the stuff is coming down ... At some point, it's all going to come together. It's going to happen."

Booth continued, "I don't know if people understand because this is a great thing. It's going to take two years to build this project. Your hotels, your restaurants, everyplace in town is going to benefit. When we put convention centers in like that, it's an unbelievable ride. We need to get this passed for Alva." 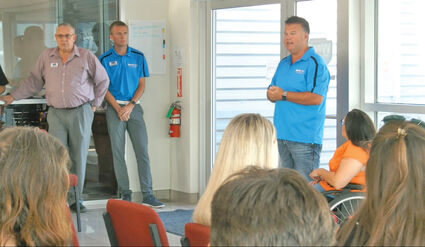 "It will be huge. A lot of people don't understand what it will mean to a community our size," Williams said.

"I had people from out of state, and they like Alva," Williams added. "They liked the people they met, which sometimes surprised me (laughter covered his words). I think at some point, I hope I'm just a traffic director. I just point out spots and people just start doing things. That's where we want to get.

"You're a big part of it. We can't do anything without you guys. Just keep that in mind ... a positive town where they are all for progress. People see that when they come in. I heard some things this past week that because I live here, I don't see. We overlook a lot of that because we're so used to it."

Questions continued about the arena project and other topics. A video of the meeting may be seen at http://www.AlvaReviewCourier.com.