No action on 4th St. rezoning 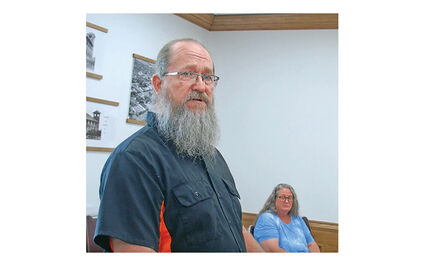 Tom Streich tells the Alva Planning Commission about the building he'd like to add to his property at 1020 4th Street.

As the meeting time approached, it appeared the Alva Planning Commission would not have enough members present for a quorum. Mary Hamilton and Tyler Crawford were present. Chairman Christie Kornele arrived from an out of town trip, but they were still one member short.

Mayor Kelly Parker began contacting those who were absent. He learned Charles Murrow and Mark Nichols would not be there. He left a message but did not hear back from Matt Adair.

While waiting for responses, Parker began researching ordinances to determine what would happen if there were no meeting. He learned the Planning Commission has 45 days after a rezoning request is filed to take action. This meant the application from Tom Streich, dated June 10, would expire before another meeting could be scheduled. Luckily, Adair replied and made it to the meeting although they started late.

Interim City Inspector Bryan Miller was unable to attend so Parker gave the inspector's report from notes Miller left with him. Miller has had lots of building permits and yard complaints to process.

One problem is the number of recreational vehicles that are parked at houses and being used as residences which is illegal. He has received some complaints about the new apartment building at 9th and Oklahoma. The weeds have been cut but there are still building materials stacked on the property.

Miller said it has become more popular for people to file requests to add buildings to their property that exceed the restrictions on residential property.

When the rezoning request was addressed, Parker said one letter of protest had been received regarding the change.

Streich spoke to the commission about his request to rezone 1020 4th Street from residential (RG8) to commercial neighborhood (CN). He said when he bought the property he believed it was zoned commercial. He was told at one time there were 16 phone lines going into the residence.

Streich said he was looking to the future in case circumstances made his present location unavailable. He wants to add a large building behind his house where he can store and work on his projects. His wife also sells products such as soaps, candles and art online so they could use the extra space.

Currently Streich is renting the building formerly known as the Bender and Son building on Oklahoma Boulevard for his business, Snapy Tom's. He works at restoring old vehicles. He said he's not going to stop working there; he just needs somewhere "to have an overflow."

Crawford asked about the height of the proposed building. Streich said Miller told him the maximum was 25 feet, but he didn't think it would be that tall. "As long as we can get a 10 foot door in the end of it," he said it would be acceptable. He said it might be 16 foot with maybe 12 foot sidewalks. "We're not going to try to go max on everything," he added. He said high building prices are also a factor in not going bigger.

"Our neighbor put a building in his backyard. We used to have a beautiful view out there. Now all we see is a metal building," said Hamilton. "That's what this person in here is saying (the letter of protest), that it will obstruct all of their views and congestion." She asked if the alley is used by a lot of people to get into their parking areas.

Streich said, "No, not really." He said there is one house on the other side of the alley that uses it for access.

As for traffic, Streich said they don't have much, "Mainly UPS and FedEx is the only traffic at the shop now."

"When you're doing a restoration job, you end up spending a couple of years maybe on one vehicle," he said. "The biggest thing is getting the parts in, the time it takes to make everything old look new again. A lot of stuff we farm out like paint jobs."

Anita Streich said that everything to the north of their property is zoned commercial. Her husband said from the Burlap Bungalow on Oklahoma Boulevard south to their property is commercial. The RG8 designation starts at their property. He pointed out that the Bungalow will be the new location of the Vanilla Bean and they are putting a drive-through on the back side so there will be a lot of traffic from that.

Kornele pointed out that the strategic planning task force has been working for a year and a half and is expecting to do away with the commercial neighborhood designation.

Hamilton expressed the wish that Miller were present to answer some of the questions. Parker called Miller and put him on speaker phone.

Hamilton asked how much of the property Streich could cover with buildings and remain RG8. Miller said you take the length of the lot by the width and multiply by 30 percent.

Hamilton asked about traffic in the alley. Miller said one building that did not get a permit is already too close to the alley. He said he worries that this building might cause more traffic than the alley is designed for.

"Well, I find this to be a very unique situation," said Adair. "With the four lots to the north being zoned commercial neighborhood already right up to their property line, that's a unique characteristic that we don't often encounter. I think it may be best to defer to the city council and allow the full deliberation of the council plus whoever they can reach out to. I'm inclined to move it forward with no recommendation, not for or against. Let the city council do what they want to do with it just because it's different than a lot of them we've encountered."

"And we did that last time with basically the same request," said Kornele referring to Truman Cookson's rezoning application for 4 Choctaw St. She asked Parker for verification of the process.

Parker realized that the Cookson rezoning application was not heard at the last council meeting. "We will have to hear that as well at city council," he said. "You're right. I forgot that there was no motion."

Commission members recommended that Streich try to get neighbors supporting the rezoning to attend the city council and speak in his favor.

The meeting adjourned with no action on the rezoning request so it will go to the city council for a decision.