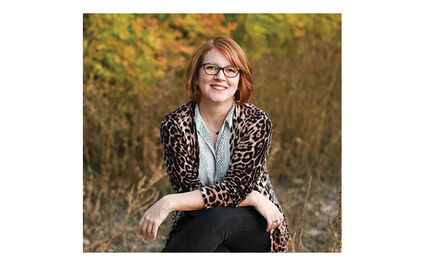 Alva native Leslie Williams will be at the Alva Public Library Saturday, Aug. 14, 9 a.m. to noon, for a book signing. Her first book, "We Did Something About It," was recently published. Photo provided

Inspiration comes in many forms. For Alva High School graduate and first-time author Leslie Williams, it came in the form of a dream. During the 2020 pandemic, she followed the Jerry Epstein case and spent time watching videos about sex trafficking. Perhaps it was that extra screen time that sparked her dream.

Although she didn't use the dream scene in her book, it was the springboard that gave her the impetus to finish writing her book in three weeks. "Once the story came to me, it just happened," she said.

"We Did Something About It" tells the story of Dr. Emilia Burke, a single mother and psychology professor at Dartmouth, and Ravi Weiss, an Israeli hacker grad student. They meet when presenting their research at the same event. Burke has developed a method to analyze where sex trafficking is likely to occur while Weiss has developed a program to identify sex trafficking hot spots.

As the two discuss the topic, they become convinced they need put their research into action. Focused on their mission, they travel with other vacationers all over the world to rescue hundreds of women and children while bringing the traffickers to their own brand of justice. But they are not invincible and sometimes the best-laid plans can go awry.

Like all the best authors, Williams draws on her background and experiences including her military service and her studies in psychology.

When Williams moved with her family to Alva, she began attending classes in the third grade and continued through her senior year, graduating with the class of 2000. She served a stint in the Army and later obtained a bachelor's degree in psychology from Cameron University while working in pediatrics as a nurse.

Williams took a look at her options. As a new mother, she didn't want to go deeper into therapy. She simply didn't have the time. It would have meant too much time away from her baby. She began to work on a master's degree in English.

Now with "three beautiful children" she's working nights and taking care of her family during the day. Her two boys and one girl are ages 3, 6 and 9. Williams learned of an opportunity in the Walters Police Department and joined them as a reserve officer. She's been riding along with full time officers on night shifts and will start going to the police academy next month. As in her writing, it's a way of seeking justice for others.

Somehow in her busy schedule, she finds time to work on her next book. "I write almost every day," she says. "It's monumentally therapeutic." She also spends a lot of time on research.

Her first book will be part of a trilogy, and she's already writing the third. Williams said she's currently editing her work on the second novel and will be submitting it to the publisher soon. While working on her master's degree, which she has put on hold, she was assigned to write a romance novel. And now a fifth book is in the works. "I write non-stop," she said.

While attending Alva High School, Williams remembers the encouragement of English teachers Judi Shirley and Claudette Erhlich. She always thought, "I'm going to be a writer." Now that goal is a reality with her first published book.

Next Saturday, Aug. 14, Leslie Williams will be at the Alva Public Library to sign books and answer questions about her writing. She also hopes to reconnect with her local friends. She'll be at the library from 9 a.m. to noon and plans to have a few books available for purchase. The paperback book is also available online from Amazon, Barnes and Noble and Olympia Publishers. If you purchase the book ahead of time, Williams will be glad to sign your copy.