Seeing beyond the surface 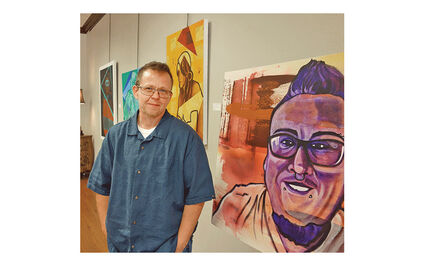 Trace Logan leads viewers past the surface to see the inner person with bold slashes of color and transparent images of people. The Oklahoma City artist's paintings are on display during August at Graceful Arts Gallery in Alva.

"Beauty is only skin deep." "There's more to him than meets the eye." Our culture tells us to look deeper than the surface of people. That's Trace Logan's goal in his paintings.

Originally from Philadelphia, Pennsylvania, Logan now lives in Oklahoma City. He can't pinpoint a time when he started to draw. Crayons, markers, he used whatever was available. "If you give me dirt and a stick, I will draw in the dirt with a stick," he says. "That was pretty much encouraged by my family, enabled in other words." He was always well supplied with paper, markers and crayons.

One of his first projects was making what he called "paper people." They were essentially paper dolls, only there were a hundred of them or maybe 150. "On the backs I would write their names, their ages. They had little backstories, they had families. These were my toys."

He took one or two classes at a local art studio in his younger years. In high school, he took graphic design and commercial art. He said, "That was something I really enjoyed as far as making very bold graphic designs."

Then reality intervened. "I got older, I had to earn money, I chose different paths," Logan said. "I got a degree from Oklahoma City University in psychology." More recently he took all the art classes offered at Oklahoma City Community College but skipped the basics like science so didn't complete a degree there. He has also attended some workshops at Art Space in Oklahoma City.

Logan is currently exhibiting his work at Graceful Arts Gallery in Alva. The west wall of the gallery features his current artistic output. Brilliant abstract colors form the background for graphic-style portraits of people.

"As far as my current artistic output, I have been working on melding representational portraits with abstract art," he said. "The series I'm currently working on, I've been calling 'ghosted'. It's not an official name, but it's the one I've been using.

"The whole point is to see the abstraction through the person so you get the concept that we're all more than what you may see. That comes from my psychology degree.

"I'm very interested in identity and perception and private and public personas. So that lets me play with that idea, only in paint."

Next to his 'ghosted' paintings are photographic prints of another project. "I also work with a photography medium through the computer," said Logan. "With that I take photographs, some I've taken, some from family snapshots, some from WPA artists (from the digital print collection through the U.S. archives) and put them together with different elements, some hand-drawn.

"I've got abstract paintings in there and just different kinds of things and kind of mesh them all together. It could be called collage, but I try to make the end image look more unified."

He said collage is very sporadic, emphasizing the difference between elements. His prints are more like a photographic composite. "I really want it to look like one image from several different views."

He explained that these are one-of-a-kind originals. He puts together the image, photographs it, has it printed professionally only once and signs it. There are no other copies.

Logan's work is on display during August at Graceful Arts Gallery in Alva. Visitors can stop in and browse at their leisure. If you want to know more about Logan's work, you can check his website at TraceLogan.com or look for him on Instagram at logan_tracef.