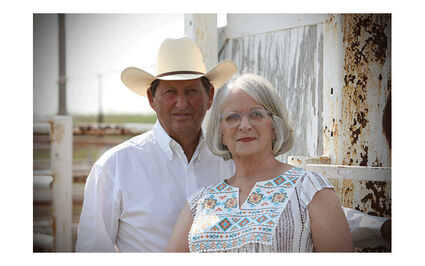 On Saturday, Aug. 21, at 11 a.m., come out to the Cimarron Cowboy Monument in Freedom for the Old Cowhand's Reunion and Chuck Wagon Feed.

A traditional part of the long-running Freedom Rodeo, the gathering gives local cowboys, cowgirls, and those who love them a chance to honor one of their own.

This year's Honored Old Cowhand will be Gary Earnest, 75. It's practically an Earnest family tradition at this point; other family members honored in this same way include Lena Earnest Selman in 1963 and Gary's father, Gene Earnest, in 1987.

Gary's roots run deep in Freedom; back around 1900, his great-grandparents, William and Elizabeth Earnest, moved from Missouri and settled 8 miles east of Freedom in the Fairvalley area. In fact, the Earnest family house that Gary was raised in was built over a dugout. Gary, like his father before him, grew up riding horses, checking fences and water gaps, and joining with neighbors to work cattle at roundup.

A biography of Gary written specifically for the Aug. 21 event describes his childhood this way:

"When Gary looks back on these days of his youth, he remarks that ranching was hard work for his parents and older sister Patsy during droughts and snowstorms, but as a kid you didn't always realize how hard it must have been. Around the house, there was a cow to milk, chickens and horses to feed, a dog to play with, clothes to wash and hang out to dry, cooking and canning. Then on the ranch there were fences to repair, strays to chase and calves to work. Gary remembers his mother making pancakes and eggs every morning for breakfast. He remembers the outhouse before indoor plumbing. He also remembers it was his joy as a boy to be lowered into the cistern to clean it out. When the cistern ran low, his dad would have to drive into Freedom to fill up a tank with water for the household to use as the well water was too hard from gypsum."

Practically horse-back since infancy, it wasn't long before Gary was involved in rodeoing. A calf-roper, he rodeoed all around the region, he said, including in the Freedom rodeo.

Gary served in the Oklahoma Army National Guard for six years, and is a long-time member of the Freedom American Legion. He worked for several businesses in the Alva area, including M&R Equipment and Kramp Feedlot, before going to work for Panhandle Eastern Pipeline Company until his retirement in 1993, although "retirement" may not be the right word for someone who becomes a full-time rancher.

In this new phase of his life, he built up his Black Angus herd and, over the years, has purchased or leased several thousand acres of land to run his ever-growing herd on. During this time, he also helped Luddington Cattle Company with their bull sale.

The Earnest family operation has changed a lot over the years, Gary said, incorporating advances in pasture management, breeding, and healthy animal practices. The family corporation is now called Brass Spur after a set of spurs owned by Gary's father, Gene Earnest.

Other things have remained the same – like gathering with neighbors in the spring for cattle roundup. 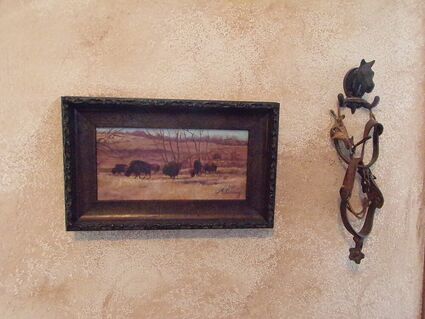 A western painting hangs next to the original brass spurs worn by Gary Earnest's father, Gene. The family corporation is named Brass Spur after this very pair.

Gary has long been active behind the scenes at the Freedom Rodeo as well, grooming the arena, welding and painting chutes, and mowing the parking area alongside other local enthusiasts. He served on the Rodeo Committee for more than 20 years, sometimes as the committee's chairman.

Gary is quick to make clear how important a connection to nature and the animals under his care are to him. "A lot of people think ranching is all about money, but it's not. There's a real connection with the animals. You get to know them; you know if something's wrong with one of them, or if one is missing." If the animals suffer, the rancher suffers for them. Gary said his father had a real gift for knowing if anything was wrong with any of the cattle, and spoke with warmth about how his father's first thought in the morning was to go out and make sure his cattle were okay.

With true cowboy modesty, when asked why he thinks he is being honored, Gary's first response was, "Oh, probably because I'm old," and laughed.

Clearly, those who nominated and voted for him would beg to differ.