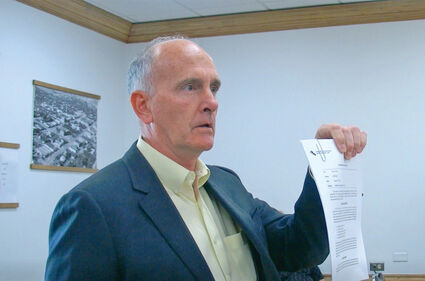 Alva Arena Authority Treasurer Todd Holder displays an advisory concerning the ordinance triggering the Arena TIF District. He told Alva City Councilmembers it gave the best explaination of the orderiance they were considering.

After reading the agenda item for Ordinance 2021-002, Mayor Kelly Parker told city council members Monday, "This is in regard to the tax increment district that was established back in 2018 for the benefit of the Alva Arena Authority and the development of an eventual arena. The city council did approve that tax increment district. It's my understanding we are not creating anything new as much as we are putting a start date on the district and allowing them to move forward with the plans that had already been approved."

Six of the eight councilmembers attended the meeting with both Ward I representatives, Daniel Winters and Connor Martin, absent.

After public hearings, the city council approved the TIF district ordinance on August 20, 2018. Through an oversight, it was not approved by the Woods County Commissioners until September 21, 2020. Councilmembers were provided with the 2018 ordinance, the new proposed ordinance and an advisory memorandum.

Councilmember Taylor Dowling asked, "Can you kind of go into how the ad valorem tax will work for the residents inside that TIF district? Will it raise their property values or will it just take away from what their current property values are? How will that, in turn, affect the amount of ad valorem tax the schools receive?"

Holding up a copy of the advisory memorandum, Alva Arena Authority Treasurer Todd Holder said, "Did you get a copy of this document? Did you have a chance to go through it? That would explain it very, very well. It does not raise property taxes, Taylor."

Dowling then inquired if it takes away from existing property values.

"No it does not take away from what's existing. It only takes the amount that is incrementally raised in the project area by additional buildings or increased ad valorem for the period of 25 years," said Holder.

"OK, so it takes away from the things that are added to that TIF district?" asked Dowling

"There is nothing that's 'taken away'," said Holder. "This document explains it really well, and I'm happy to go into it page by page if you want to, but it explains it very, very well. And again, tonight we're not doing anything to set, that's already taken care of. The only thing we're doing is the start date. The county commissioners and the city council have already set the plans in motion. The only thing you're doing tonight is initiating the start date.

"That two percent is in addition to (what)?" asked Dowling.

"It's one percent. The city's portion is two and based on that, on the people that come from outside of this zip code. That again is also explained very well in this document," said Holder

"It does not," said Holder. "It's (Walmart) inside that district but it is mainly the events at the event center."

"So is it expected to increase property values?" asked Brooks.

"It's just that if anybody built a structure inside that district, that the tax off that structure is going to go to," said Brooks.

"For the first 25 years." said Holder. "And if the property values go up, anything that goes up, and we certainly hope they do go up, then that portion would go into that district as well, for the first 25 years, or until $12 million is generated out of the TIF district."

"So that increase won't go to the county or the school system?" asked Brooks.

"There's a percentage of it that remains in the school system," said Holder. "Twenty percent of that still goes to the school. Again, we are not raising taxes. Understood?"

After a pause, Mayor Parker asked if there were more questions.

City Attorney Rick Cunningham said, "I think it says in there, this starts the starting date."

"From this day forth," said Cunningham. He said when the ad valorem taxes are examined the TIF district revenue will be implemented.

Sherman asked if the motion should include the start date of the TIF district, but Cunningham said it will be the date of the implementation of the ordinance.

"By declaring an emergency, it makes it in force today," said Parker. Cunningham added that if no emergency is declared by a council vote, the ordinance takes effect 30 days after publication.

Sherman made the motion to approve the ordinance, seconded by Randy Stelling. Sherman, Stelling, Greg Bowman, and Sadie Bier voted in favor while Brooks and Dowling voted no. The ordinance passed 4-2.

"Is there a reason to put it off?" countered Stelling.

Holder was called back into the room and asked to respond. He said, "It's time. We're ready."

With no further discussion, the vote was called with Stelling, Bowman and Bier voting in favor while Sherman, Dowling and Brooks voted no. With the resulting 3-3 tie vote, Mayor Parker had his first opportunity to vote to break a tie. He voted yes, and the emergency clause carried.