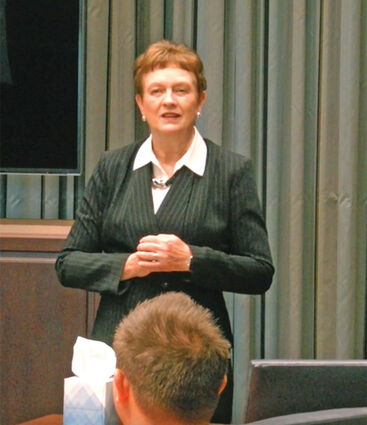 Dr. Janet Cunningham, president of NWOSU, talks about fall classes at the university. She spoke at the Alva Chamber Community Coffee Friday.

Northwestern Oklahoma State University President Dr. Janet Cunningham said students began classes on Monday. This fall, in line with state law, there are no mandatory face coverings. "I think the students and most of the faculty and staff are grateful for that," she said. "Last year was a little bit of a tough year. We went basically the whole year with mandatory face coverings."

She said there have been three Covid-19 cases, but two were students who were not yet on campus. Even before fall classes began, for most of the summer there were almost 100 football players on campus doing weight training, and there were no cases of coronavirus among them.

Sports schedules will begin soon. Last year there was no football, and the other sports, 13 in all, were condensed into spring.

Regarding enrollment, Cunningham said numbers are down a little. After talking with other Oklahoma college presidents, she felt fortunate. East Central reported enrollment down ten percent and the University of Central Oklahoma was down 6.5 percent.

Recruitment has been tough with the Ranger Previews being held virtually. NWOSU will be hosting a Ranger Preview on campus Nov. 13. The Rangers will be playing Southwestern so a big crowd is expected. Cunningham added that the Alva incentive funds, from the half-cent sales tax, are a huge difference maker for enrollment.

Superintendent Daren Slater from Northwest Technical Center followed Cunningham. "Alva is unique in that we have three educational institutions,' he said. "The great thing about Alva is we all work together. I look around and see students that were at the tech center, and they were at Alva High and then with Dr. Cunningham at Northwestern. That partnership and collaboration doesn't always happen in every community." He said that attitude continues in the community as students move into jobs with local businesses.

Enrollment numbers are up compared to the last couple of years, Slater said. The electrical trades and automotive programs are full. He said tech center enrollment depends on how many students are in classes in the communities they serve including Alva, Cherokee, Freedom and Waynoka.

In addition to high school sophomores, juniors and seniors, the tech center also has adult students. He said the mixing of adults with high school students in classes provides an example of maturity and focus for younger students. Although he said when he was a student, older adults were called "curve setters."

Financial manager Gina Kendrick is retiring at the end of September after 35 years at Northwest Tech. However, Slater thinks the transition will be smooth with Ashlee Sneary moving into that role. The school has some new instructors with Pam Malone teaching computer classes, Melanie Blackwood in practical nursing and Adam Honeyman in criminal justice.

October 3-6 the local school will host career tech staff from around the state. Slater said he enjoys telling visitors they have finally reached the center of the state. He demonstrates this by folding a map in half and showing them Alva is on the fold between the east and west edges of the state. 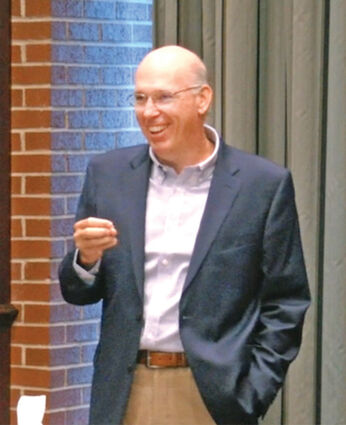 Daren Slater, superintendent of Northwest Technology, says enrollment is up at the tech center in Alva. He spoke Friday at the Community Coffee.

Dr. David Pecha, NWOSU homecoming chairman, said that event will be Oct. 7-9. Miss Oklahoma will be the emcee for the Miss Cinderella pageant. He said Karen Koehn is in charge of homecoming button sales.

Meagan Lehr reported the Bank It program this quarter will benefit Kayla's Kindness, a project providing care items for hospital patients. Local banks accept donations and will match the funds.

The next Alva Chamber Community Coffee will be held on Sept. 17 at Value Added Products.