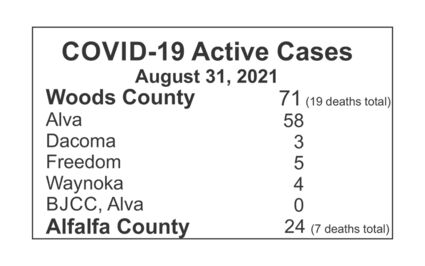 According to the weekly report released Wednesday, Aug. 31, by the Oklahoma State Department of Health (OSDH), the state now has 26,640 active cases of Covid-19. The risk level map shows 76 counties in the "orange" level with only Harper County in "yellow."

In the health department Region 1 covering northwestern Oklahoma, the three-day average of hospitalizations is 47 with 11 in ICU. The state total is 1,477 hospitalized with 413 in ICU. State hospitalizations include 41 in pediatric beds.